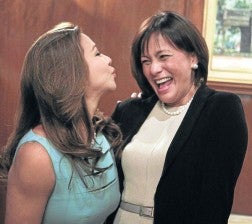 It was what any quick-thinking husband would do.

While waiting for his oath-taking rites to start in Malacañang on Monday, newly designated Transportation Secretary Mar Roxas spotted his wife Korina Sanchez in a chat with a female Palace aide—and saw a great opportunity to dispel some pesky rumors.

Within minutes, Roxas had a Palace photographer clicking away at the two women, who gamely posed and smiled, with Sanchez even goofing around in her sleeveless, aqua dress.

The other woman in the picture was Susan Reyes, President Benigno Aquino III’s social secretary, whom blind items for the past few months had romantically linked to the new Cabinet member.

A known socialite, Reyes is the ex-wife of former basketball legend Francis Arnaiz of the defunct Toyota team.

“Eto ang istorya (This is the story),” Roxas was heard telling the photographer.

The photo-op caused quite a stir at the President’s Hall as guests, including family and friends of the Roxas couple, cheered the whole sideshow, apparently getting what Roxas wanted to say in pictures.

Reporters were mostly on the other side of the hall when they heard the cheering. When asked about it later, Roxas just laughed and said: “Kayo lang ang naglalagay ng laman (You’re the only ones who put a meaning to it).”

“Just ask the photographer why he was taking pictures,” he said.

The rumors began making the rounds following initial reports that Roxas could be appointed Malacañang chief of staff.

At one point, Sanchez, a popular broadcast journalist and news anchor, had to deny rumors that she and Roxas had split because of a so-called third party.

Just as Roxas probably wanted it, Monday’s shots showed Sanchez and Reyes having a good laugh, with the former even pretending to plant a kiss on the “other woman.”