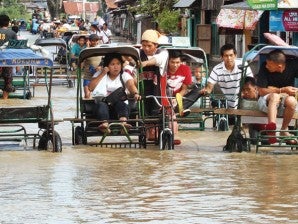 Big waves swept coastal villages in several provinces in Mindanao and sank a boat in Palawan province, killing at least seven people, as rescuers searched for scores of fishermen out at sea following monsoon rains since Monday.

Floods also occurred in Sarangani, Maguindanao, Bukidnon, North Cotabato and Sultan Kudarat provinces, and in Cotabato City even before a storm reported by weathermen to be brewing east of northern Mindanao could possibly hit the area in the next two days.

In Davao City, a year-old girl was killed in a landslide at Barangay (village) Marilog on Monday.

Most parts of the country could expect more rains today with the anticipated arrival of the storm, according to the Philippine Atmospheric, Geophysical and Astronomical Services Administration (Pagasa). Once it enters the country, it will be named “Buchoy” (international code-name: Guchol).

The approaching storm was packing maximum sustained winds of 65 kilometers per hour and gustiness of up to 80 kph, Pagasa said. As of Wednesday, it was spotted 1,370 km east of Mindanao and was moving west northwest at 15 kph.

The storm may arrive Thursday or early Friday, and is expected to enhance the southwest monsoon which is bringing rains to most parts of the country.

“We already advised all local officials to prepare,” Benito Ramos, executive director of the National Disaster Risk Reduction and Management Council, told a radio station based in Cotabato City Wednesday.

The fatalities were identified as Segapo Cabalinding, Orlando Mata and Primo Ortega.

Floodwaters began to rise Tuesday morning and several roads and bridges were destroyed, Yap said. Some 500 families took shelter in a gymnasium.

All the missing persons were fishermen whose fishing vessels capsized on Tuesday due to strong wind and big waves in the Sarangani Bay, Lawa said. “We were able to rescue 27 other fishermen.”

Lawa said there were reports that many of the missing fishermen had survived. They did not receive any warning about the bad weather on Tuesday as they were out at sea as early as Monday night, he said.

All over the province, Navy and Philippine Coast Guard personnel have rescued more than 40 fishermen since Tuesday night, Sarangani Governor Miguel Rene Dominguez said. “A rescue mission is going on,” he added.

In northern Palawan, Commodore Alex Lopez, head of the Joint Task Force Malampaya based in El Nido, confirmed four fatalities—two males and two females—in the sinking of the ferry boat MV Joecell 2 after smashing into sharp corals near Tent Island at around 11 p.m. on Tuesday.

Tent Island is a small protrusion of limestone in the picturesque seascape of El Nido.

At least 10 other passengers were still missing, Lopez said. Most of the passengers are residents of the island village of Liminangcong in Taytay town, who were traveling to El Nido or catching another vessel to Manila.

Authorities were unable to provide accurate information on the exact number of passengers but said the manifest indicated 34 people on board, excluding a crew of 12.

“We were swept by the strong winds and rough seas and I suddenly felt we hit something underneath,” recalled Grace Sagun, one of the 22 passengers who swam to the island.

She said the lights in the boat then went out and the people panicked. Blinded by rain and darkness, as it was almost midnight, Sagun said she decided to jump off the boat amid the confusion.

According to her, she realized she and the passengers were closer to shore than she had thought because she almost instantly found herself clinging to a rock. “I saw the dead body of a young boy floating in the water,” she said.

As there was a mobile phone signal on the island, Sagun said she was able to contact the Coast Guard, “but I had to tell them they could not come to us because of the strong waves.”

Three of the bodies were brought to shore while another was retrieved by fishermen in a boat.

“We can’t say yet if all passengers have been accounted for,” Commodore Armand Balilo, Coast Guard spokesperson, said in Manila.

A Philippine Navy ship and a Coast Guard vessel, the BRP Romblon, could not reach the survivors on Tent because of submerged rocks and reefs.

On Monday, seven fishermen from Navotas City were rescued by a passing cargo vessel, the MV Ocean Prosperity, after their boat sank off Rosario town in Cavite province.

In Davao del Sur province, a mission was launched to search for seven fishermen who were out in the open sea off Digos City. Rey Caballero, head of the city’s disaster risk reduction and management council, said he hoped they had drifted to a safe area.

Dennis Domingo, information officer of the Department of Social Welfare and Development in Central Mindanao, said the floods had displaced hundreds of families in the region.

“Our men in the field reported 5,507 affected families in Sultan Kudarat alone and we are closely monitoring the weather condition,” said Loreto Rirao, OCD head for the Autonomous Region in Muslim Mindanao.

Sultan Kudarat Mayor Tocao Mastura said the floods proved that the P500-million Simuay River diversion canal could not protect the residents. The project was undertaken by a private contractor and supervised by the Department of Public Works and Highways under the flood control program of the previous Arroyo administration.

City Administrator Cynthia Sayadi said an evacuation plan had long been mapped out and would be carried through the help of social welfare and health personnel, village officials, the police and the military.

Residents near river tributaries were also asked to conduct frequent monitoring of water levels, said Rirao, the ARMM-OCD head. “When the water consistently rises, they should leave their homes,” he said.

In Kidapawan City, residents along the riverbanks have long been ordered to evacuate, according to its mayor, Rodolfo Gantuangco.

“We are constantly monitoring the weather and closely coordinating with disaster officials in Compostela Valley’s 11 municipalities. So far, rain has been minimal. Everything’s normal,” Villocino told the Philippine Daily Inquirer by mobile phone.

In Davao Oriental, search and rescue units in every police station have been put on alert for easier mobilization in case of flooding and landslides, said Senior Superintendent Perpetuo Macion, provincial police chief.

Mayor Lolita Moral of the rice-producing municipality of Braulio Dujali, said volunteers had been trained in disaster-preparedness, “making us prepared anytime.”