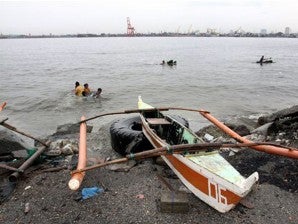 An outrigger is placed on top of the break water in anticipation of big waves Wednesday, , in Manila, Philippines. The onset of the typhoon season brought heavy rains and strong waves in some part of the country killing at least two people and leaving 10 missing while rescuers searched for 80 more fishermen after monsoon rains inundated southern villages. (AP Photo/Pat Roque)

Benito Ramos, executive director of the National Disaster Risk Reduction and Management Council, told a Cotabato City-based radio station that the floods and the storm surges were caused by bad weather as the Philippine Atmospheric Geophysical and Astronomical Services Administration reported about a storm that may enter the Philippine area of responsibility in the next two days.

“We already advised all local officials to prepare. Pagasa reported that the typhoon will enter the country by Thursday or Friday,” he said.

In its bulletin issued 5 a.m. Wednesday, the weather bureau said the shallow low pressure area was estimated to be 210 kilometers east of Northern Mindanao.

“Flashfloods and landslides alert remain over the entire region as scattered to widespread rains will be experienced due to the existing weather system,” Pagasa said.

The flooding also resulted in the evacuation of 500 families to a gymnasium. The flood waters begun to rise on Tuesday morning and some roads and bridges were destroyed, he said.

In Maasim town, Mayor Arturo Lawa reported that as of 7 a.m. Wednesday, 118 persons were reported missing in eight affected coastal villages of his municipality.

“As of 7 a.m. Wednesday, we were able to rescue 27 other fishermen. All the 118 missing victims were fishermen, whose fishing vessels capsized Tuesday due to strong wind and big waves in Sarangani Bay,” Lawa said.

But Sarangani Gov. Miguel Rene Dominguez said more than 40 fishermen had been plucked out of sea all over the province by Navy and Philippine Coast Guard operatives since Tuesday night.

“Rescue mission is (on)going … for others who were reported to be missing,” he said.

Dennis Domingo, information officer of the Department of Social Welfare and Development in Central Mindanao, said hundreds of families were displaced regionwide as villages were submerged in floods and battered by huge waves.

“Our men on the field reported some 5,507 affected families in Sultan Kudarat alone and we are closely monitoring the weather condition,” said retired Army General Loreto Rirao, OCD head for the Autonomous Region in Muslim Mindanao.

In Davao del Sur, a search and rescue operation was also launched as seven fishermen went missing in high seas off Digos City.

Sultan Kudarat, Maguindanao Mayor Tocao Mastura said the floods proved that the multimillion Simuay River diversion canal project undertaken by a private contractor and supervised by the Department of Public Works and Highways could not protect his constituents.

The diversion canal was constructed for P500 million under the Arroyo government’s flood control programs.

Officials said they have instituted plans in anticipation of floods and other weather-related disasters.

Cotabato City Administrator Cynthia Sayadi said an evacuation plan had long been mapped out and will be carried through the help of social welfare and health personnel, village officials, the police and the military.

“When the water consistently rises, they should leave their homes,” he said.

Evacuation has also been ordered for those leaving along river banks in Kidapawan City, according to Mayor Rodolfo Gantuangco.

In Compostela Valley Province, evacuation plans were also crafted for areas identified as geohazards, according to Raul Villocino, the provincial disaster officer.

“We are constantly monitoring the weather and closely coordinating with disaster officials in Compostela Valley’s 11 municipalities. So far, rain’s minimal. Everything’s normal,” Villocino told the Inquirer by mobile phone.

He said a system has long been in place so flood and landslide warning and advisories could be disseminated effectively by municipal and village officials.

In Davao Oriental, search and rescue (SAR) units in every police station have been put on alert for easier mobilization in case of flooding and landslides, Senior Supt. Perpetuo Macion, provincial police chief said.

Macion said the PNP SAR teams would coordinate with the municipal disaster councils as they have the needed search and rescue equipment.

Flood-prone towns in Davao del Norte were also up in their preparations, according to officials.

Mayor Lolita Moral of the rice-producing municipality of Braulio Dujali, said rescue volunteers have been trained in disaster-preparedness, “making us prepared anytime.”

Ramos said they were hoping that the storm will not make a landfall. However, if the direction will change, the public should follow instructions from their local disaster units.

In Davao City, The Mines and Geosciences Bureau had ordered the relocation of 40 households following a landslide that killed a one-year old girl in Marilog on Monday.