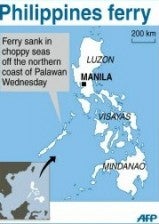 Map showing the northern coast of Palawan in the Philippines where at least two people were reported killed and 22 others were missing after a ferry sank Wednesday. AFP

A Philippine Navy ship and another from the Philippine Coast Guard had been deployed for search-and-rescue operations.

MV Josille II, which departed from the port of Liminangcong, sank off Pagawanin Island shortly before midnight Tuesday.