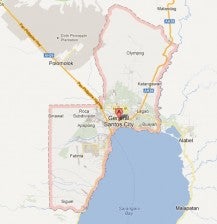 MANILA, Philippines—Two were killed and thousands of families were affected from flashfloods brought by heavy downpour in Mindanao since Monday, the National Disaster Risk Reduction and Management Council reported.

The two were identified as Sagapo Cabigding, 63, of Glan in Sarangani and Rolando Mata, 40, from General Santos City.

Meanwhile, 19 fishermen were rescued from the villages of Ostigue, Baybay, Big Margus and Kalambiga in Glan, the NDRRMC said.

In Sultan Kudarat, 2,460 families were affected from villages of Obial, Sta. Clara, Hinalaan, Himulan and Kalamansig due to heavy rains.

Twenty-three of these families were already evacuated to higher grounds, it added.

Evacuation for residents was being readied if needed, the NDRRMC said.

As of 5p.m., the shallow low pressure area causing the rains in Mindanao was seen 110 kilometers southwest of Cotabato City.

Mindanao and Visayas will have mostly cloudy skies with scattered rainshowers and thunderstorms becoming cloudy with widespread rains over Davao provinces, Southern Mindanao and Zamboanga provinces which may trigger flashfloods and landslides, the Philippine Atmospheric Geophysical and Astronomical Services Administration said.