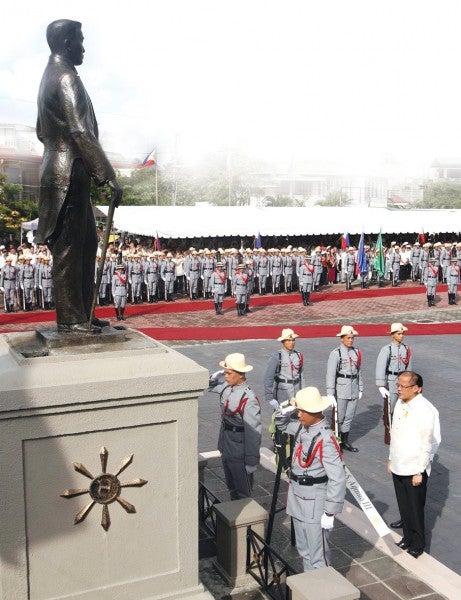 BARASOAIN CHURCH President Aquino lays a wreath at the base of the statue of Gen. Emilio Aguinaldo after leading a flag-raising ceremony in front of the historic Barasoain Church in Malolos, Bulacan province, on Tuesday. LYN RILLON

Mr. Aquino led the flag-raising and wreath-laying ceremonies on Tuesday at Barasoain Church here, where the first Philippine Constitution was drafted and where the First Republic was proclaimed during the struggle against 333 years of Spanish colonial rule.

“The Constitution that should be the refuge of the common person has become the plaything of those who act like kings. They move as if they hold the blindfold of justice, as if they are licensed to change, subtract and turn over the Constitution,” he said.

“Our country witnessed the trial of Mr. Corona, our former Chief Justice. This process took five months. Nonetheless, it brightened the essence of our democracy,” Mr. Aquino said.

“It is the right of Filipinos to know the truth and feel that the democratic system is alive in the country. It also impressed upon our public servants that the power entrusted to them by Juan dela Cruz carries with it responsibilities and obligations.”

The President said apathy and inaction were the reasons, aside from greed for power, why corruption spread.

“The lighthouse of democracy has dimmed because nobody took care of brightness,” he said. “Now that the country has gained momentum in the straight path, we won’t allow that we’d again lose our way in the darkness of the past.”

The President adverted to the constitutional provision that all power and authority emanates from the people.

“It’s only just that they be the ones who’d benefit from our efforts. That’s why every reform that we are pushing for—from jobs that we generate for our countrymen to justice for all, from repairing our social systems to prudent spending of our funds—should reflect the principles embodied inside this very church in 1898,” he said.

Speaking later before the diplomatic corps at the traditional Palace reception marking the 114th anniversary of the country’s proclamation of independence, Mr. Aquino renewed his commitment to peace and cooperation, saying “prosperity cannot come in isolation.”

Government and merchant ships in Manila Bay sounded their fog horns for two minutes as the Philippine flag was raised in ceremonies organized by the Philippine Coast Guard at nearby Rizal Park at 8 a.m.

Roxas reminded Filipinos of the danger that lurked as the selfish interests of a few threatened to derail the administration’s anticorruption policy.

Halfway through his speech, eight protesters began shouting from behind the crowd, decrying the government’s reclamation project on Manila Bay and the increasing prices of basic commodities.

Police and park security men unfurled a tarpaulin to keep them out of sight.

In an Independence Day statement, Vice President Jejomar Binay said the country “will not be totally free and independent if many Filipinos still live in poverty.”

“Like President Aquino, I am aware of this challenge. That is why, I am appealing to all sectors of society, including those belonging to various regional, political or religious affiliations, to unite under a common cause, which is giving every Filipino a good life,” Binay said.

In Angeles City, Tourism Secretary Ramon Jimenez Jr. said the struggle for Philippine independence was not yet over because many Filipinos remained immersed in poverty.

“Freedom is the beginning, not the end, of actions lifting our nation,” said Jimenez, who placed a wreath at the gate of the Pamintuan mansion where President Emilio Aguinaldo, on June 12, 1899, led troops celebrating the first anniversary of freedom from Spanish rule.

Jimenez said good governance was contributing to the full attainment of freedom manifested in quality life for Filipinos.

In the City of San Fernando, Mayor Oscar Rodriguez said, “It is everybody’s responsibility to the nation to tread the straight path.”

In Malaysia, some 1,200 Filipinos celebrated Independence Day with a parade on the main streets of Kuala Lumpur on June 10, Ambassador Eduardo Malaya reported.

The parade, the first to be held there, came after 20 Filipino organizations formed the Federation of Filipino Associations in Malaysia, Malaya said.

Filipinos showed local culture through floats. A musical concert and food feast at the Philippine embassy grounds capped the event.