YANGON, Myanmar – Myanmar’s president has declared a state of emergency in a western state where sectarian tensions between Buddhists and Muslims have unleashed deadly violence. He warned that if the situation spun out of control, it could jeopardize the democratic reforms he has been instituting since taking office last year. 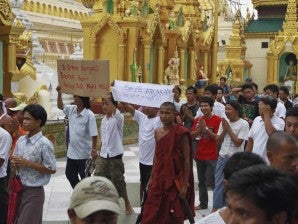 It is the first time Thein Sein has invoked the measure since becoming president. A state of emergency effectively allows the military to take over administrative functions for Rakhine State, a coastal region that borders Bangladesh.

The move follows rioting on Friday in two Rakhine areas that state media said left at least seven people dead and 17 wounded, and saw hundreds of houses burned down. The unrest spread on Saturday and Sunday, though order was said to have been restored in the areas shaken by Friday’s violence.

In a nine-minute speech televised nationally Sunday night, Thein Sein said that the violence in Rakhine State was fanned by dissatisfaction harbored by different religious and ethnic groups, hatred and the desire for vengeance.

“If this endless anarchic vengeance and deadly acts continue, there is the danger of them spreading to other parts and being overwhelmed by subversive influences,” he said. “If that happens, it can severely affect peace and tranquility and our nascent democratic reforms and the development of the country.”

The accounts in state media blamed Friday’s rioting in Maungdaw and Buthidaung townships on 1,000 “terrorists,” but residents’ accounts made clear they were Muslims. The unrest seemed to be a reaction to the June 3 lynching of 10 Muslims by a crowd of 300 Buddhists. The lynch mob was apparently provoked by leaflets discussing the rape and murder last month of a Buddhist girl, allegedly by three Muslim men.

The violence reflects long-standing tensions in Rakhine state between Buddhist residents and Muslims, many of whom are considered to be illegal settlers from neighboring Bangladesh.

Myanmar’s government does not recognize the Muslims in the area, who term themselves Rohingyas, as one of the country’s national minorities. Although the basic problem is a local one, there is fear that the trouble could spread elsewhere because the split also runs along religious lines.

“I would like to call upon the people, political parties, religious leaders and the media to join hands with the government with a sense of duty, to help restore peace and stability and to prevent further escalation of violence,” Thein Sein said.

Shops in the state capital, Sittwe, were closed and the busy port city was unusually quiet Sunday, according to residents, though some neighborhoods experienced trouble.

“Some houses were set on fire by the Muslims today in Sittwe and four Rakhine villagers arrived at the hospital with knife wounds,” said Nu Nu Tha, a Sittwe resident contacted by phone.

“Almost all shops are closed and people live in fear that the Muslims might attack the Rakhine population. I am very scared and I have sent my children to Yangon by plane,” Nu Nu Tha said.

Army troops had been deployed Friday in Maungdaw and Buthidaung to help police keep order, and security officials were reported to have fired shots to quell the violence. Curfews were also imposed.

In contrast to the previous military regime, Thein Sein’s government has been relatively open in releasing timely information about the recent trouble. Under the former ruling junta, such incidents usually went unreported or were referred to only in brief, cryptic fashion.

Thein Sein was elected with the backing of the military, but discarded many of its repressive policies to seek accommodation with the pro-democracy movement of Nobel peace laureate Aung San Suu Kyi.

In Myanmar’s capital, Yangon, on Sunday, Buddhist monks and people from Rakhine state — about 500 in all — went to the Shwedagon Pagoda, the country’s most revered Buddhist shrine, to say prayers for the murdered girl and those killed in the clashes.