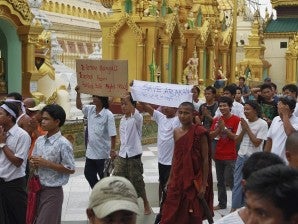 Myanmar's Rakhine ethnic people pray at Shwedagon pagoda on Saturday, June 9, 2012, in Yangon, Myanmar. A group of some 150 Rakhine ethnic nationals and Buddhist monks went to the Shwedagon Pagoda - Myanmar's most revered Buddhist shrine - to say prayers for those killed in sectarian violence in western Rakhine state. AP/Khin Maung Win

The rioting reflected long-standing tensions in Rakhine state between Buddhist residents and Muslims, many of whom are considered to be illegal settlers from neighboring Bangladesh. Although the root of the problem is localized — centering on resentment of the alleged cross-border outsiders — there is fear that the trouble could spread elsewhere because the split also runs along religious lines.

The state-run newspaper Myanma Ahlin said security forces had to open fire to restrain the rioters, while state television announced that army troops had been deployed to help police in Maungdaw and Buthidaung townships, where the mobs rampaged. A dusk-to-dawn curfew was applied and public gatherings of more than five people banned.

According to the television report, seven people were killed and 17 wounded in Friday’s violence. It said 494 houses, 19 shops and a guest house were burned down.

Myanma Ahlin daily reported that about 1,000 “terrorists” were responsible for the rampage, which also saw some storm Maungdaw General Hospital. State media did not otherwise identify the rioters, but the area is 90 percent Muslim, and local residents contacted by phone said the mob’s members were Muslims. The dead were evidently all Buddhists, judging by the names of those victims who were mentioned in Myanma Ahlin, which added that those hurt had knife wounds.

The TV report said, without further elaboration, that Myanmar naval forces were taking security measures along the nearby coast on the Bay of Bengal.

The Information Ministry’s website said camps have been opened at monasteries to shelter those who lost their homes, and the defense and health ministries had flown in doctors to tend to the injured.

The amount of information about the incident released by state media in a timely fashion is nearly unprecedented. Under the previous military regime, such incidents usually went unreported or were referred to only in brief, cryptic fashion.

The elected though military-backed government of President Thein Sein has instituted reforms to try to reverse decades of repression, including allowing a much freer flow of information.

The U.S. expressed concern over the ongoing violence in Rakhine state and urged “an immediate halt to violent attacks.”

“We also encourage the government to pursue an investigation in an expeditious and transparent manner that respects due process and the rule of law,” State Department spokeswoman Victoria Nuland said Saturday.

The trigger for the latest round of violence came with the rape and murder of a young Buddhist girl last month, allegedly by three Muslim youths. They have been put on trial, Myanma Ahlin reported Saturday. Some anti-Muslim pamphlets were circulated about the incident, evidently enflaming local Buddhists. On June 3, 10 Muslims were killed by an angry mob who attacked a bus carrying them from a religious gathering in Rakhine’s Taunggup town.

In Yangon on Saturday, a group of some 150 people from Rakhine state and some Buddhist monks went to the Shwedagon Pagoda — Myanmar’s most revered Buddhist shrine — to say prayers for the murdered girl and those killed in the clashes.

The group walked a circuit around the pagoda, made some speeches, and left. Some carried placards that read “Defend the Rakhine State” and “Remove Bengali terrorists from Rakhine State right now.”

On Tuesday, dozens of Muslims protested peacefully in front of a mosque in downtown Yangon calling for justice for the 10 dead and complaining about terminology used by state-run newspapers they said was derogatory.

The “All Myanmar Islam Association” issued a statement carried in state newspapers Saturday asking Muslims to keep calm and condemning the “terrorizing and destruction of lives and property of innocent people.”

This past week the government announced it was establishing a special committee to investigate the bus incident and another unrelated case of violence in Rakhine that occurred the same day. The establishment of such a committee also breaks with past precedent.

The problems in Rakhine state have long been overshadowed by the conflicts between the government and large ethnic minorities in other border areas who have been seeking greater autonomy. While Thein Sein’s government has concluded cease-fires with several ethnic guerrilla groups, it still face a bitter insurgency in the north by the Kachin ethnic minority.