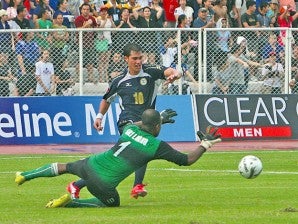 The goals came as promised —and history was made.

Before a wet and festive Sunday crowd at Rizal Memorial Stadium in Manila, the Philippine Azkals gave a clinical display of attacking football to claim a 4-0 victory over Sri Lanka and advance to the second round of the 2014 Fifa World Cup Qualifying series for the first time in the country’s history.

In an awe-inspiring performance that brought back memories of the country’s once-proud football past, the Azkals justified the hype with two goals in each half in a systematic beating of the South Asians.

The victory—5-1 on aggregate in the home-and-away series—also sent the Philippines to a second round meeting with Kuwait on July 23 and July 28.

The Sri Lankans held the Azkals to a 1-1 stalemate in the opening leg in Colombo on Wednesday.

“It’s an amazing feeling making history in front of your countrymen,” Azkals’ skipper Aly Borromeo said. “But we know the road ahead gets tougher from here.”

Playing on a better pitch, the Azkals flashed a fluid passing game that led to Phil Younghusband scoring twice and Chieffy Caligdong and Angel Guirado contributing a goal each.

“This is the kind of game that we really want to play,” said team manager Dan Palami, who started bankrolling the squad close to two years ago.

Finally showing their true potential that was sharpened after a two-week training in Germany, the Azkals left the Sri Lankans chasing shadows with their quick and slick ball movement early on.

It was a far cry from their performance in the opening leg, and the early pressure paid off.

The crowd that came as early as 11 a.m. and braved a downpour that coincided with the kickoff, needed to wait just 19 minutes into the game to see the Azkals get rewarded with their early enterprising play.

The fleet-footed Caligdong, latching onto Younghusband’s headed pass, took four touches before unleashing a right-footed shot that bounced off the right side of the left post before crossing the line, prompting wild celebrations from the estimated 12,000 fans.

Caligdong, a proud son of Barotac Nuevo, Iloilo, who was already with the national team when the squad was getting little attention, waxed emotional recalling his goal.

“It’s special scoring here,” said Caligdong in Filipino. “We have sacrificed a lot just to be here and we’re happy that it paid off.”

Caligdong’s goal opened the floodgates for the Azkals.

Younghusband doubled the lead in controversial fashion, getting into the box with a slight nudge against a defender, before firing into an empty net for a 2-0 lead two minutes before halftime.

The linesman had flagged Younghusband for a foul, but the referee overruled the call and gave the Azkal striker the goal, to the chagrin of the Sri Lankan players, who converged on the game official to complain.

The Azkals picked up from where they left off in the second half and went 3-0 five minutes after the restart.

James Younghusband supplied a defense-splitting ball for Guirado, who beat the offside trap and the rushing Sri Lankan keeper before rolling the ball for an easy goal.

The Azkals cruised from there and their sustained dominance earned another penalty for midfielder Stephan Schrock, who was fouled just inside the area by defender Wellala Chathura.

Phil Younghusband bundled the penalty into the top corner for his team’s fourth and his second goal.

The Azkals missed a host of chances in the last 40 minutes with James Younghusband, Ian Araneta, Caligdong and Guirado all coming close to adding to their tally.

But there was no doubting the Azkals’ dominance.

They had 26 shots on goal against the Sri Lankans’ meek tally of four. The Azkals, though, had five players with yellow cards, with Borromeo and Schrock among the notable players with two bookings, including one each from the home leg.

Both players, however, will be available for the first leg in Kuwait on July 23 since yellow cards are not carried over into the next round.

“Kuwait will be a very tough opponent,” Azkals coach Michael Weiss said. “We’re going to work doubly hard, that’s why we are appealing for patience.”

Weiss, a German, couldn’t help but marvel at the newfound support the team has been getting, which he described as “very moving.”

The crowd did the Mexican wave and shouted “Pi-li-pi-nas!” in unison throughout the game, turning the match into one big party.

It was the sixth straight home match that the Azkals did not concede a goal, extending standout goalkeeper Neil Etheridge’s impressive clean-sheet streak.

Manny Ott, the young midfielder from Germany whose mother hails from Boracay, controlled the midfield, while Rob Gier, Anton del Rosario and Paul Mulders all frustrated the Sri Lankans with their rock-solid defensive stand.

The last time they played a home match in Bacolod, the Azkals blanked Mongolia, 2-nil.

Even Malacañang was caught up in the frenzy of the Azkals’ victory.

“The entire nation was thrilled by the victory of our very own Philippine Azkals,” President Aquino said in a statement. “Truly, there is no place like home, as those gathered at Rizal Memorial and who gathered before their TV sets today experienced.”

Mr. Aquino added: “To the Philippine Azkals, may the teamwork you displayed today on both sides of the pitch lead to more than just future victories; may you continue to inspire our youth to pursue teamwork, and the true spirit of sportsmanship that, win or lose, inspires excellence on and off the field.”

He said the victory showed that if Filipinos “can work together … then our victories as a country can extend far beyond the football pitch … I wish you the best of luck against Kuwait!”

The name “Azkals” is a play on the Filipino term for stray dogs (asong kalye), or dogs without a home or pedigree. The name caught fire with the inclusion into the team of players of mixed Filipino and foreign parentage, including American, British, German, Dutch, Spanish and Danish.

Fans said the name stands for someone who transcends bloodlines and conquers all odds to win.