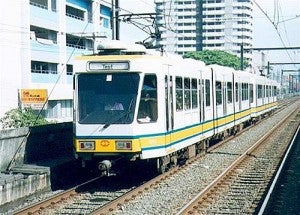 Users of the social networking website Twitter were eager to suggest names for the baby girl born onboard a train of the Light Rail Transit (LRT) Line 1 on Thursday.

In the end, however, the parents chose “Lilibeth.”

The first two letters were derived from Libertad, the station in Pasay City where the mother started going into labor, said Hernando Cabrera, spokesperson of the Light Rail Transit Authority (LRTA).

According to Cabrera, who broke the news through his Twitter account @attycabs, the father, Roger Ambrosio, was then rushing his live-in partner Angel Hutba to Jose Fabella Memorial Hospital in Manila as she was about to give birth.

“The two are from Perpetual Village in Taguig. They boarded the LRT at Edsa-Taft Station at around 11:30 this morning. Showie Prudenciano, a guard at the station, escorted the two to the special boarding area of the train,” Cabrera said in a statement.

Upon reaching Libertad station, Angel’s water broke. Prudenciano then asked the other passengers if there was anyone who knew how to assist in the delivery.

“Two passengers, who happened to be nurses—Ronelyn Horario and Ana Marie Bugcat— voluntarily helped the mother deliver the baby at around 11:45 a.m., just before reaching Gil Puyat Station in Makati,” Cabrera said.

The couple, together with their newborn, continued the train ride until they reached Pedro Gil Station in Manila, where LRT security rushed the family to Philippine General Hospital.

Cabrera said doctors at PGH later confirmed that Angel made a safe delivery and that Lilibeth was in good condition.

The LRTA spokesperson said that before Roger and Angel picked a name for the girl, the Twitter community teemed with colorful suggestions.

He recalled that it was the second time in two years that a baby was born inside LRT facilities. On Oct. 30, 2010, LRT guard Elnora Castro helped a passenger deliver a baby boy at the platform area of  Pedro Gil Station.

LRTA officer in charge Emerson Benitez said the incident only showed that LRT employees were always ready to respond to any emergency, including “bizarre and extraordinary situations such as this.”

Other tweets monitored by the Inquirer offered more names.

“Larita,” said a netizen at @Ozbloki, playing on the transport agency’s initials. Or maybe  “KaTRAINa,” said the user behind @Targrod.

Other tweets also had different observations and reactions, including one from @changzkulot which wondered whether the train’s cramped conditions caused the mother to suddenly go into labor.

For being born on the train,  the child should be given “free lifetime LRT ride,” according to @guiacom. With Fe Zamora, Jamie Elona and Frances Mangosing