Aquino wants Lacson, Pangilinan in his Cabinet after their terms end | Inquirer News

Aquino wants Lacson, Pangilinan in his Cabinet after their terms end 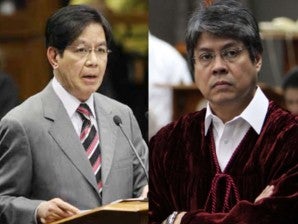 LONDON—Expect Senators Francis “Kiko” Pangilinan and Panfilo “Ping” Lacson to become members of the Aquino Cabinet when their terms expire next year.

President Benigno Aquino III confirmed that he planned to tap the two senators to join his Cabinet if they wanted to.

“Those two in particular,” Mr. Aquino said during a coffee meeting with reporters on Wednesday before he left for the United States.

Pangilinan and Lacson are among the senators who would complete their two six-year terms at the Senate and are not eligible to run for reelection.

Lacson, the chief of Philippine National Police during the Estrada administration, is said to be eyeing the post of interior secretary, whose department has supervision over the PNP.

Pangilinan, on the other hand, is said to be interested in the agriculture department.

The President declined to say what Cabinet posts he had in mind for the two, saying he would consult with them first.

“We are not going to coerce anyone to accept any position. We will talk with them. If they have advocacies that they think they can do for the (Chief) Executive, we are open to them,” he said.

“I thank the President for this vote of confidence,” Pangilinan said in Manila in a phone interview.

“I’d rather wait for him to talk to me and formally make the offer,” Lacson said.

“If I think the position fits my line of expertise so that I can help him pursue his vision for our country, then I would seriously think about accepting it. At this time when I have more past than future, it’s still worth capping my public service career by helping pursue our people’s dream for our children’s future.”

Interior Secretary Jesse Robredo, who has been repeatedly bypassed by the Commission on Appointments, said he did not feel threatened by rumors that Lacson was poised to take over his job.

“Not in any way,” Robredo said Thursday. But he repeated that he was only secure in his position  as the President’s confidence in him.

“I know I am occupying the post of a casual employee,” he told the Inquirer via a text message, punctuating his note with the SMS equivalent of a laugh.

“I chanced upon [Mr. Aquino’s] interview with [ABS-CBN news anchor] Ted Failon, and it seems the answer is yes,” he said in reply to the Philippine Daily Inquirer’s question on whether he still enjoyed the President’s confidence.

Mr. Aquino was on a three-day official visit to enhance trade and economic relations between the Philippines and the United Kingdom. He met with British Prime Minister David Cameron and Prince Andrew, and presided over the signing of business agreements worth $1.03 billion.

He left Wednesday evening for Washington to meet with US President Barack Obama. With reports from Michael Lim Ubac and DJ Yap in Manila