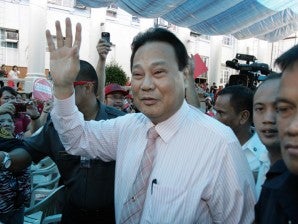 Ousted Chief Justice Renato Corona on Wednesday tried to mend fences with the media who may have become angry or hostile because of his refusal to grant interviews during his impeachment trial at the Senate.

Corona on Wednesday met briefly with the journalists covering the justice beat when he and his family—his wife, Cristina, and daughter, Carla—went to the Supreme Court to cart away his papers and personal belongings.

“Thanks to you all,” a smiling Corona greeted the journalists who went to see him at his old office.

“I’m sorry if I appeared not to be cooperative at times. Rest assured that there was an urge for me to accommodate you, but the circumstances would not allow me,” he said gravely.

“I ask for your forgiveness. I tried my best to be accommodating,” he said in a mixture of English and Filipino.

Corona gamely posed with reporters who requested for a short photo session with him.

His wife who was wearing a black shirt emblazoned with the words “Not Guilty” and “Acquit” also joined the group of journalists.

Corona said he just realized that it was not that easy to move his stuff out of the Supreme Court where he had held office since 2002 when former President Gloria Macapagal-Arroyo appointed him associate justice.

To a suggestion that he could just raffle off one of the paintings in his office to the members of the media, Corona said with a laugh: “I don’t have a job anymore. I will just sell it to you in ‘four gives.’”

The ousted Chief Justice said his health has been improving although he still has to continue taking maintenance medicines.

“I’m healthy enough to be discharged from the hospital,” he said.