Binay wants next chief justice to come from academe 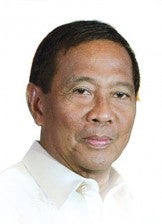 MANILA, Philippines–If he were to have it his way, Vice President Jejomar Binay said he would want the next chief justice to come from the academe.

“I hope whoever will be chosen will have judicial maturity and administrative capability, and preferably from the academe. Those from the academe should also be considered,” Binay told reporters during a press briefing Tuesday at the Ninoy Aquino International Airport upon arrival from official working visit in Malaysia and the United States.

The Vice President met with Malaysian government officials before he went to the US, where he spoke before a World Bank forum on housing finance and attended the Philippine Independence Day celebration in Los Angeles, California.

He said there are potential candidates in the field of the academe whose judicial maturity cannot be questioned. But he declined to name names.

“It would be best that the next chief justice not only be sharp legally but also have the administrative experience and capabilities in the judiciary because the chief justice has two jobs. One is to oversee dispensation of justice and the other is to administrate over the Supreme Court,” he explained.

He added that the next Chief Justice must not be perceived as playing politics.

He recalled that during his time as a student at the UP College of Law, most of their teachers were known legal luminaries who later served as chief justices.

Asked to comment about reports that Justice Secretary Leila De Lima and Bureau of Internal Revenue Commissioner Kim Henares are among those being considered for the position of the country’s top magistrate, Binay said, “It’s up to President Aquino to decide on that.”

During the press briefing, Binay was also asked if acting Chief Justice Antonio Carpio was not included in his list of possible replacement to former Chief Justice Renato Corona, who was convicted by the impeachment court.

Carpio, being the most senior among the justices at the Supreme Court, is acting chief justice after Corona’s conviction for dishonesty in his SALN and ouster from his post.

“In fairness to Carpio, he is the second most senior justice but there have been cases when the next in rank was not selected as the new chief justice,” he said as he cited the case of Justice Artemio Panganiban.

“I remember the case of Justice Panganiban, he was not number two when he was appointed,” he said.

Meanwhile, Binay said he wouldn’t mind signing a waiver on his bank accounts “because I’m not hiding anything.”

But he stressed that the statement of assets, liabilities and net worth is the best evidence of a government official’s honesty and trustworthiness.

“If you want a copy, it’s with the Office of the Ombudsman. It’s a public document, anyway,” the Vice President said.