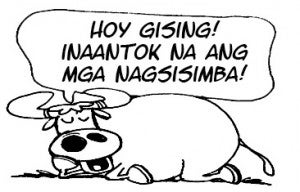 Parishioners falling asleep during homilies should be an eye-opener for the Catholic Church, declared a bishop who urged Catholic priests to put more passion into their delivery of God’s word, just like the preachers and leaders of charismatic movements.

Novaliches Bishop Emeritus Teodoro Bacani said that instead of going to gatherings by the Church, more people now prefer to attend events organized by charismatic groups mainly because of the “livelier” and more intense speeches delivered by their preachers.

“You’ll notice that even if the speeches of these preachers are long, the people are awake. But when we (priests) are giving long homilies, the people are asleep,” Bacani said in his speech during the 6th National Charismatic Congress held in Pasay City on Thursday.

Held every two years, the event gathered active members of parish-based prayer groups and transparochial covenant communities, fellowships and ministries in the Catholic Charismatic Renewal Movement across the country.

The prelate cited the usually protracted gatherings of the influential El Shaddai Catholic charismatic movement led by TV evangelist Mike Velarde.  Most of the group’s huge assemblies are held overnight with hundreds of thousands of its about 5 million members keeping vigil.

“You’ll see that (wakefulness) in the people attending El Shaddai, Soldiers of Christ and the gatherings of Bro. Bo Sanchez,” noted the bishop, who also acts as the El Shaddai spiritual leader.

But Bacani was quick to add that this phenomenon was not a source of alarm for the Catholic Church, but an “eye-opener.”

“It’s not alarming, but I think it draws our attention to the way we deliver our homilies,” he said. “There is a need for priests to have that kind of spirituality supporting their ministry of preaching, to study the Bible and how to effectively communicate their message to the people.”

Bacani later told reporters that while Catholic members who join these charismatic movements didn’t mean to “exclude the Church … they find these [gatherings] more attractive.”