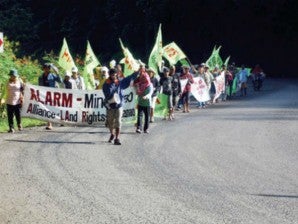 LONG MARCH On the second day of their march, 60 farmers from Bukidnon and Davao pass through the boundary of Sumilao and Manolo Fortich towns in Bukidnon. They are walking the 100 kilometers from Malaybalay City to Cagayan de Oro City to demand full implementation of the agrarian reform program by the Aquino administration. They will join 5,000 other farmers from Negros and Batangas in the march on Malacañang in Manila. BOBBY LAGSA / INQUIRER MINDANAO

Hundreds of farmers, concerned that time is ticking on the government’s agrarian reform program, are knocking on the doors of Malacañang, hoping to see President Benigno Aquino.

No one has told them yet, officially that is, that Mr. Aquino left Monday for London for an official visit and where he met with Prime Minister David Cameron.

At least 20 members of the 100-strong Catholic Bishops’ Conference of the Philippines (CBCP) have signed a letter requesting an audience with the President for the farmers seeking a firm commitment that he would fully implement the Comprehensive Agrarian Reform Program (CARP), according to the Most Rev. Roderick S. Pabillo.

The program launched on June 10, 1988, was the centerpiece of the promise of social justice of Mr. Aquino’s mother, the late President Corazon Aquino. It is expiring in two years with nearly 1 million hectares of the country’s prime agricultural estates still to be distributed.

“Unless there is strong political will, it will not happen,” said Pabillo, head of the CBCP’s National Secretariat for Social Action.

Representatives of farmer groups from Negros Occidental, Davao and Bukidnon provinces, where the most productive agricultural lands are located, have begun converging in Manila for a march on Malacañang this weekend to press demands that Mr. Aquino fullfill an election campaign promise that he will implement the program his mother initiated.

Pabillo and Fr. Marlon Lacal, the executive secretary of the Association of Major Religious Superiors of the Philippines, signed the letter, which was sent to Malacañang on June 1, requesting an audience with Mr. Aquino on either Friday or Saturday.

Pabillo said the letter was sent by e-mail to all CBCP members for signature, but only 20 had so far replied. Most of the bishops are in remote provinces and communicating with them on short notice could be a problem, he said.

“Only those who opened the e-mail responded,” he said. But he said that all the bishops, who are to convene for their semiannual meeting next month for important policy considerations, had all supported the enactment of the CARP program designed to lift millions of Filipinos from poverty and remove a major cause of the world’s longest running communist insurgency.

“It’s a law that has to be implemented, because it is a social justice issue for the small farmers. So I think all the bishops are in accord.”

The letter slammed the Department of Agrarian Reform (DAR) for consistently “underperforming” in the implementation of the five-year CARP law with reforms, or Carper, passed in 2009, particularly in land acquisition and distribution, or LAD.

“This is shown by the huge backlog in covering the remaining 1,093,000 hectares of agricultural lands. In 2011, it only accomplished 54.6 percent of its national LAD target,” it said.

Around 250,000 ha are supposed to be distributed annually under the Carper law. As of the end of last year, the DAR said it had distributed 4.3 million ha, a sizable portion of which comprise public agricultural lands.

“In Negros Occidental, the current DAR only managed to distribute 1,789 ha in 2011. The DAR will have to work at 20 times its current pace to meet its targets. There has been no significant movement in the 135,199-ha total provincial backlog as of January 2012, and no notices of coverage had been issued on large estates,” the letter said.

It said the DAR performance for the first six months of 2012 was expected to be “equally dismal.” The DAR under Mr. Aquino, it said, had recorded the lowest CARP accomplishment compared to previous administrations.

“With this appalling situation, farmers and tillers become restless and desperate. They fear the winds of August 2014, the end year of the extended period of CARP. They have fought for land reform for decades and fear that it will be all for naught,” it said.

“These farmers risked their lives for Cory and believed her promise that CARP will liberate them from the bondage of serfdom. They voted for P-Noy (President Aquino) because he represented their last chance of realizing their dream of owning their own land. These are the mainstream peasants who have patiently abided by the cumbersome ways of democracy and have resisted the calls for violent revolution,” the letter said.

“They wish to ask the President to use his enormous political capital to fulfill the vision of CARP by distributing all the remaining balance of ‘CARP-able’ agricultural lands and by providing the necessary support services and financial support that would help them become successful owner-cultivators.”

In the interview with the Inquirer, Pabillo said that under Aquino, CARP was underfunded and required allocation for technical support and credit were not provided. The Carper law calls for an allocation of P150 billion for five years.

The Department of Budget and Management cut the DAR request for a P30-billion allocation this year to around P18 billion and removed another P4.9 billion in support services, according to a senior DAR official, who likewise said the department was being dismantled in preparation for the end of the Carper program.

“The DAR is only following the wishes of the President,” Pabillo said. “If there is no clear mandate, there is no enthusiasm from the executive, you can expect the same thing from the rest in the office.”