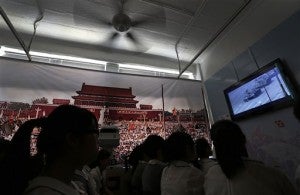 Students watch a video footage of the crackdown of the June 4, 1989, pro-democracy movement in Beijing's Tiananmen Square at the June 4 Memorial Museum run by pro-democracy activists in Hong Kong Monday, June 4, 2012, to commemorate the 23rd anniversary of the bloodshed. AP PHOTO/VINCENT YU

HONG KONG—Hong Kong marked the 23rd anniversary of the bloody crackdown in Tiananmen Square on Monday with impassioned calls to never forget the students who sacrificed their lives for democratic reform.

The former British colony is the only place in China where the brutal military intervention that ended weeks of nationwide democracy protests in 1989 is openly commemorated.

More than 150,000 people are expected to attend a candlelight vigil at the city’s Victoria Park on Monday evening, an annual act of remembrance for the hundreds, perhaps thousands, of people killed in the June 3-4 onslaught.

For three days ahead of the vigil, local students staged a re-enactment of the hunger strike that student leaders launched in Beijing’s Tiananmen Square 23 years ago as they demanded a dialogue with top regime leaders.

The anniversary is a “very symbolic event for the future of Hong Kong’s social development,” said 28-year-old social worker Cheston Cheung, who had arrived in Victoria Park ahead of the vigil.

“It represents the things that we believe in and we want to remind the Hong Kong people about this. The June 4 events are not dead. It is very much alive.”

An official Chinese Communist Party verdict after the Tiananmen protests branded the movement a “counter-revolutionary rebellion,” and the events of 1989 have largely been expunged from Chinese official history.

Mainland police beat and detained activists ahead of the anniversary in an attempt to “clean up unstable elements,” rights activists said. The authorities have denied or refused to confirm the reports.

Hong Kong reverted to Chinese rule in 1997 as a semi-autonomous territory with its own mini-constitution that guarantees basic rights and freedoms not enjoyed on the mainland, including freedom of speech and assembly.

This year’s anniversary comes at a time of heightened political tensions in Beijing, as the Communist Party prepares for its 10-yearly power transition, and in Hong Kong where a new chief executive is about to take office.

Leung has dismissed the concerns, promising to “uphold the core values of Hong Kong” as well as the “One Country Two Systems” concept that defines its status under Chinese rule.