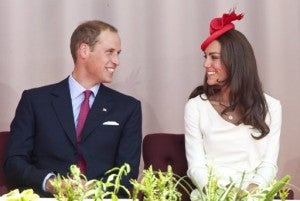 FIRST FOREIGN TOUR. Catherine, Duchess of Cambridge, speaks to her husband Prince William as the couple takes part in Canada Day celebrations on Parliament Hill in Ottawa on July 1, 2011. The Duke and Duchess are on a nine-day tour of Canada, their first official foreign trip as husband and wife. AFP

The Duchess and Duke of Cambridge arrived in the afternoon in a glossy black state landau to join nearly one third of the capital city’s population of 900,000 – cheering “Will and Kate” on the parliament lawn.

“We love you Kate,” one section screamed when she stepped out of the carriage.

The crowd decked out in red and white, Canada’s national colors, ballooned to half a million by nightfall when fireworks lit up the sky.

Wearing a purple Issa Jersey dress, the princess and her prince, who had by then thrown off his necktie, were dazzled with pyrotechniques framed by some of finest Gothic Revival architecture in the British Empire on Parliament Hill.

“Catherine and I are thrilled and excited by the prospect of the next eight days,” William said. “It will be an adventure that we will never forget.”

Thousands had lined Ottawa’s Wellington Street at dawn to secure a view of the royal couple when they made their way to the city’s government precinct for musical performances by Canadian bands Delhi 2 Dublin and Great Big Sea, as well as Pierre Lapointe and Sam Roberts, among others.

“The excitement is palpable here,” he said.

Under a blistering sun, a few fans collapsed and were carried off by medics moments before the royals’ arrival on Parliament Hill.

Those who coped were treated to a fly-past of fighter jets, a changing of the military guard decked in red tunics and towering bear fur hats, as well as Canada’s national anthem sung by a 10-year-old girl from Winnipeg who shot to fame performing Lady Gaga’s “Born This Way” on a video that went viral online.

William said his new bride learned about Canada from her grandfather, who died last year, “but who held this country dear to his heart for he trained in Alberta as a young pilot during the Second World War.”

The prince, second in line to the British throne, also conveyed his grandmother’s “warmest good wishes.”

Britain and Canada’s monarch Queen Elizabeth II, he said, has taken a “great interest” in the couple’s trip to Canada and will be “following our progress as it unfolds.”

Packed with pomp and pageantry, the North American tour marks the couple’s first foreign trip as newlyweds, coming just two months after a radiant Kate Middleton walked down the aisle in a fairytale royal wedding watched by an estimated two billion people worldwide.

“Welcome, congratulations and bon voyage,” Harper wished them, “the world’s most famous newlyweds” at the start of their cross-Canada tour.

Over the coming week, William and Kate are to take a cooking class in Montreal, play aboriginal sports in the far north and cap it all off with a rodeo in Calgary.

Their tour of Canada, however, also coincides with a grim milestone: Friday would have been the 50th birthday of Princess Diana, Prince William’s mother, who was mobbed by fans herself when she visited Canada in 1983. 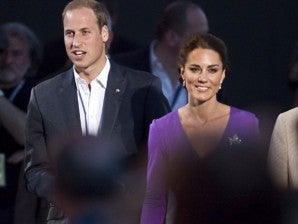 Whereas Prince Charles often seemed annoyed at being upstaged by his wife, William appeared to rejoice at the Canadian public’s attention to his new bride, visibly brimming with pride as they shared a few glances whenever enthusiastic cheers erupted for her, and once blushing over their wild welcome.

Kate represents the future of the monarchy, some said.

As gun smoke from a 21-cannon salute billowed across the sky, William gave a special nod to Canadian military wrapping up its combat mission in Afghanistan this month.

He also appeared to take a special interest in the pioneer garb of one of the Canada Day performers, running his fingers down the man’s lapel as they chatted before an afternoon break.

Earlier, Kate showed up with her husband for a citizenship ceremony at the Canadian Museum of Civilization in a stunning recycled white dress by Reiss worn for her engagement photos in December and a red maple leaf fascinator.

She and William presented each of 25 immigrants with a Canadian flag as they took an oath pledging allegiance to Queen Elizabeth II.

Some 150,000 newcomers to the country are welcomed into the Canadian family at 1,700 similar ceremonies each year.

These 25 took the oath “for the first time in the history of Canadian citizenship in the presence of one of [the queen’s] heirs who we hope will in the fullness of time become one of her successors as the king of Canada,” said Immigration Minister Jason Kenney.

Support for the monarchy hovers above 50 percent in Canada and has risen from last year when the queen visited, although there is still a vocal anti-monarchist minority planning to protest in Quebec City on Sunday.