China cracks down on Tiananmen anniversary 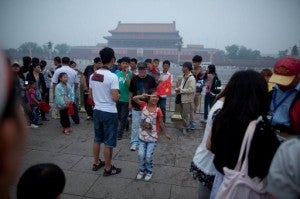 People pose for a group photo following the daily national flag-raising ceremony in Tiananmen Square in Beijing early on Sunday, June 3, 2012. Hundreds, perhaps thousands, are believed to have died when the government sent in tanks and soldiers to clear Tiananmen Square on the night of June 3-4, 1989, bringing a violent end to six weeks of pro-democracy protests. AFP PHOTO/ED JONES

BEIJING—Police in China beat and detained political activists marking the 23rd anniversary of the brutal crackdown of the Tiananmen democracy protests on Sunday, rights campaigners said.

Officers used violence against rights defenders in the southeast Fujian province and detained them, while more than 30 petitioners were held in Beijing and forced to return to their home province, the activists reported.

“Around 20 rights defenders were stopped by police and beaten this morning on May First Square,” Shi Liping, the wife of activist Lin Bingxing, told AFP by phone from Fuzhou, capital of Fujian province.

“The police said they were going to ‘beat them to death.’ They took about eight people into custody, including my husband. I fear he has been beaten badly.”

Police in Fuzhou, when contacted by AFP, denied anyone had been detained.

People’s Liberation Army soldiers stormed into central Beijing on June 3-4, 1989, firing upon unarmed demonstrators and citizens, killing hundreds if not thousands, as they ended six weeks of democracy protests on Tiananmen Square.

Over two decades later, Beijing still considers the incident a “counter-revolutionary rebellion” and a “political storm” and has refused to acknowledge any wrongdoing or consider compensation for those killed.

In Beijing, police arrested at least 30 activists from eastern China’s Zhejiang province at a Beijing railway station Saturday and put them on a bus to their hometown of Wuxi.

“The police told us it was because of June 4 (the day of the crackdown), that during sensitive periods they had to clean up unstable elements,” petitioner Xie Qiming told AFP from the bus.

“No one was beaten, but there were no legal procedures either, they just forced us on to the bus and are sending us home.”

Any mention of the protests is banned in state media. The overseas dissident website www.molihua.org in recent days urged those opposed to the crackdown to dress in black and “stroll” in public places throughout China on June 3-4.

The call, which spread through numerous microblogs like Twitter, was similar to calls last year urging Chinese to hold protests akin to those that spread through the Arab world.