DENR studying use of turtles vs knife fish 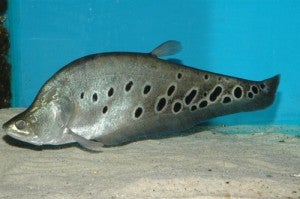 STA CRUZ, Laguna—The Department of Environment and Natural Resources (DENR) is looking into the possibility of growing soft-shelled turtles in the Laguna Lake as a solution against the spread of the knife fish.

Isidro Mercado, DENR provincial officer, came up with the suggestion when they learned that the turtles (Pelodiscus sinensis) feed on the eggs of the knife fish.

He said the turtles, although considered “predators,” would not pose harm to marine species growing in the lake since they do not eat fish.

“We think these (soft-shelled turtles) could be a possible solution, although we are still conducting further researches to determine its characteristics,” Mercado said.

The Bureau of Fisheries and Aquatic Resources (BFAR) and the Laguna Lake Development Authority (LLDA) earlier raised concerns over the presence of knife fish in Laguna Lake.

The knife fish, an ornamental but carnivorous species, feeds on native fish in the lake, leading to a decline in the catch of tilapia and bangus (milkfish).

Both agencies had advised fishermen to collect and destroy the knife-fish eggs that cling to the bamboo posts of fish pens in order to stop them from spreading.

Leah Villanueva, chief of the Inland Fisheries Research Station of BFAR in the region, said the suggestion to grow the turtles has to be backed by research results before any foreign species is introduced to the lake’s ecosystem.

“In the case of Taal Lake, the fishermen complain about these turtles because they bite off and destroy the fish nets,” she said.

She added that both BFAR and LLDA were still closely monitoring the Laguna Lake and awaiting results of new water tests conducted in the lake.

Neric Acosta, LLDA general manager, said the fish kill that started in the second week of May led to losses of more than 10,000 kilograms of fish, mostly tilapia, resulting in financial losses to fishermen estimated to be between P2 million to P3 million.

Amid the furor over fish-kill cases in some parts of Laguna Lake, the Seven Lakes Fisheries and Aquatic Resource Management Council (SLFARMC) in San Pablo City spearheaded the 7th Tilapia Festival on Thursday to show that tilapia was safe to eat.

Edison Jaramillo, SLFARMC president, said a tilapia-cooking contest was held at the Sampaloc Lake, the biggest of the seven lakes in the city. With a report from Romulo Ponte, Inquirer Southern Luzon