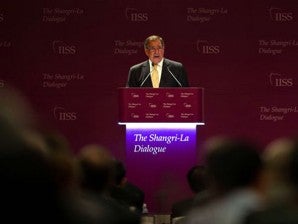 SINGAPORE—Defense Secretary Leon Panetta told Asian leaders Saturday that the US is open to forging better military ties with Myanmar, if political and human rights reforms there continue.

His comments to a defense conference here reflected new efforts by the Obama administration to ease sanctions on the Asian nation, which is also known as Burma, as it moves to implement democratic reforms.

Assuming Myanmar is able to implement reforms and continue efforts to open up its political system, the Pentagon would be willing to have discussions about how the two nations can improve their military relationship, Panetta said.

“In dealing with countries of the Asia-Pacific region, this is not a Cold War situation where the US barges in, builds permanent bases and tries to establish a power base in this region,” Panetta said, responding to a question after his speech here at the Shangri-La Dialogue, a prominent defense conference.

In the world today, he said, the US has to engage with other countries to help them build their own military capabilities so they can defend themselves.

“We will encourage that kind of relationship with ever nation that we deal with in this region, including Myanmar,” Panetta said.

Myanmar is emerging from decades of authoritarian rule and diplomatic isolation. Last month, President Barack Obama eased an investment ban on Myanmar, and named the first US ambassador to the country in 22 years.

Human rights activists, however, criticized the move, saying it was too soon to reward the country since hundreds of political prisoners are still being held there.

Panetta’s speech was designed to promote America’s new effort to focus more attention on the Asia-Pacific region, both militarily and diplomatically.