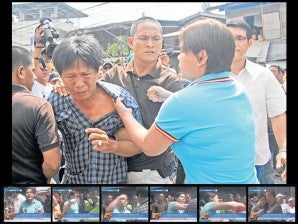 FAST AND FURIOUS Mayor Sara Duterte, popularly known as Inday Sara, is about to throw a punch at Davao City Sheriff Abe Andres, who refused to grant her request to delay the demolition of squatters’ shanties on Friday. Below is a series of videograbbed photos of Mayor Duterte punching the sheriff. Contributed photo/ABS-CBN DAVAO

DAVAO CITY—In a startling show of temper, Mayor Sara Duterte on Friday assaulted a court sheriff who was bent on demolishing houses in a contested property in Barangay (village) Soliman in the district of Agdao despite her request for a 2-hour deferment.

Sheriff Abe Andres took four blows in the left eye, the face and the back, and was taken to hospital shortly afterwards by the mayor’s bodyguard.

Sitting later in a corner of the courtroom of Judge Emmanuel Carpio, who had issued the demolition order, Andres said an emissary of Duterte’s, whom he did not name, had conveyed an apology.

He said he was awaiting the consensus of court sheriffs, as well as advice from the Sheriffs’ Confederation of the Philippines, before deciding on his action.

A number of lawyers, who asked not to be identified, said Duterte’s behavior was “very unprofessional” and constituted “obstruction of justice.” One said Duterte could be cited for contempt.

On Twitter and on the phone with the Philippine Daily Inquirer, University of the Philippines law professor Theodore Te said Duterte “could be liable under the disciplinary rules for lawyers.”

“What she did was not justifiable, not acceptable … What she could have done was take him aside and talk to him,” said Te, a member of the Free Legal Assistance Group. “[Andres] did not have to be humiliated in that manner.”

But Duterte, herself a lawyer and still fuming hours after the incident, told reporters she was not afraid.

“I don’t care,” she declared, adding in the vernacular that if she were cited for contempt, the local judiciary would be in dire financial straits: “Say goodbye to your budget. You asked for additional fund? My God, I am having difficulty with the budget. They will cite me for contempt? I will also cite them for contempt. Starting tomorrow, no more gasoline for them, no allowance, no job order!”

Duterte had rushed to Barangay Soliman upon being told that a police-backed team was preparing to demolish the shanties of 217 families in the face of angry residents armed with darts, other bladed weapons and hard objects.

In the initial confrontation between the demolition team and the residents, a policeman was hit by a dart in the buttocks.

Duterte arrived just as the demolition team was advancing.

Apparently exhausted from dealing with the floods that hit certain parts of Talomo district, Duterte told the team that she did not want bloodshed.

“I was in the middle of 13,000 people who were badly in need of assistance and here you are doing this?” she said.

She told the team that as early as Thursday, she asked the court to delay the demolition because the residents were ready to fight back and she knew it would turn bloody.

She asked the team to stay the execution of the court order for two more hours, but Andres refused.

“Is that difficult to do when I have successfully done it and I am a woman?” Duterte said, and then asked: “Where is the sheriff?”

As the sheriff was approaching, Duterte punched him twice in the face. When he tried to get away, she held him by the nape and continued punching him.

The mayor then told the stunned members of the team and the police not to proceed with the demolition. “Ayaw, ayaw (Don’t, don’t)!” she said.

The team dispersed and Andres was led away.

Per the account of Minda Saison, vice chair of the United Settlers Association, the residents were being forced out of the lot claimed by a Jaime Uy of Davao Enterprise Corp.

They received a court order on June 23 telling them to vacate the area. The next day, their lawyer tried to file an appeal but it was not until yesterday that he was able to do so in Cagayan de Oro City.

They asked the demolition team to wait for the court decision but they were ignored.

“[We] will defend our rights. We will not allow them to demolish our properties while we are still waiting for the court’s ruling on our petition for the issuance of a temporary restraining order,” Saison said.

Duterte later admitted to reporters that she was angered by how the sheriff insisted on serving the notice for eviction.

“I was asking for only two hours. Two hours. Why can’t you give that to us? Why do you insist on serving the notice? Do you think the residents will just allow you to demolish their houses without them putting up a fight?” she said.

She added that she managed to convince the residents to agree to relocation after the incident.

Duterte said she was really upset, especially with Judge Carpio, a relative of her husband. She said she had been calling Carpio to at least suspend the demolition, to no avail.

Carpio declined to comment, saying Duterte’s husband was his nephew.

But he showed the Inquirer a document he had signed ordering the deferment of the demolition, “if only to defuse the social unrest and explosive atmosphere that presently pervade the area in controversy, and to avoid possible bloodshed.”

The deferment took effect Friday and will last for 10 days.

Sheriff Andres told the Inquirer that Duterte’s assault was unexpected and that she was probably upset (“Maybe mainit ulo”).

He said he had tried to evade the mayor’s fury until one of her bodyguards held him by the hand.

“But I was told [by the bodyguard] that I’ll be taken to hospital, maybe because she saw my face bleeding,” he said.

Andres said he initially had second thoughts about going with the bodyguard, and relaxed only when they reached a government hospital.

He said he was discharged after receiving medication for contusions.

Andres said he was enforcing a court order and could not yield to the mayor’s request of deferment because the demolition had been “scheduled.”

“I was just doing a ministerial duty,” he said.

According to the Department of Interior and Local Government, Duterte may be charged with slight to serious misconduct, the penalties for which range from reprimand to dismissal.

Interior Secretary Jesse Robredo has ordered a fact-finding investigation of the incident.

Robredo said he was taken aback when he watched the video of the incident in a cable newscast, but added that conclusions could not be drawn based on TV footage alone.

He said Sheriff Andres should file a complaint to give substance to the investigation. “Due process requires first that the aggrieved party file a complaint,” he told the Inquirer on the phone.

“I think the request to delay [the demolition] by two hours was a reasonable request. It wasn’t a life-or-death situation. But what happened after that is a different story,” he said.

Robredo said the fact-finding inquiry would be led by staff members of his office who would fly to Davao City on Monday.

He said he would also speak separately with Duterte and Andres.

“This will be a full-blown investigation like in the case of [Kalinga Gov.] Jocel Baac,” who assaulted radio commentator Jerome Tabanganay in the latter’s booth last month, Robredo said.

He said he could not say when the probe of Duterte would be completed, noting that he had wanted to finish the Baac case in 10 days.

He also said he had submitted his recommendations on Baac to Malacañang, but that there was still no action on it.

The Commission on Human Rights (CHR) office in Davao City will also begin an inquiry “as soon as possible,” Director Alberto Sipaco Jr. of CHR Region 11 told the Inquirer by phone.

“I viewed the incident [on TV]. Through my conception, there seem to be traces of human rights violations,” Sipaco said.

Asked to say what violations might have occurred, he said: “There was punching.”

“In order to give an unbiased appraisal and appreciate the facts, I have to conduct an investigation. Under our mandate, we could investigate a case motu proprio (on one’s own initiative).” With reports from Judy Quiros and Dennis Jay Santos, Inquirer Mindanao; and Nikko Dizon, Tarra Quismundo and DJ Yap in Manila