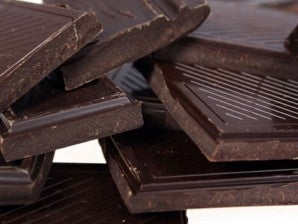 SYDNEY– Australian researchers have found that eating a block of dark chocolate daily over 10 years has “significant” benefits for high-risk cardiac patients and could prevent heart attacks and strokes.

A study of 2,013 Australians conducted at Melbourne’s Monash University found that the consumption of 100 grams (3.5 ounces) of chocolate with a 70 percent or higher cocoa content every day was an effective measure to reduce risk.

Lead researcher Ella Zomer said the team found 70 fatal and 15 non-fatal cardiovascular events per 10,000 people could be prevented over 10 years if patients at risk of having a heart attack or stroke ate dark chocolate.

“We’ve predicted significant health benefits of eating 100 grams of dark chocolate every day over a 10-year period,” Zomer said of the study, published in the British Medical Journal.

“Our findings indicate dark chocolate therapy could provide an alternative to or be used to complement drug therapeutics in people at high risk of cardiovascular disease.”

Zomer’s research partner Chris Reid said measurements from the subjects, all of whom had classic risk factors such as high blood pressure and elevated cholesterol or body weight, were run through epidemiological modelling.

The projections of likely deaths and other non-fatal events between those who consumed dark chocolate and those who did not were compared and there was a notable difference.

“One of the appeals of this study is here is a dietary alternative which may be quite appealing to a lot of people. In fact, chocolate studies have shown really good compliance rates,” Reid told AFP.

Green tea and brightly colored fruits such as red apples and blueberries are also major sources of polyphenols.

Reid said it was important to find ways to reduce heart disease as Australia’s population aged and the increasing numbers of at-risk people could use lifestyle, dietary and exercise changes to head off the need for drugs.

Experts have cautioned that excessive consumption of dark chocolate leads to obesity, itself a leading cause of cardiovascular disease.

But, said Reid: “We’re not suggesting that the high-risk group use dark chocolate as their only preventative measure, but in combination with sensible choices, such as exercise.”

Cardiovascular disease is the leading cause of death worldwide according to the World Health Organization, accounting for 30 percent of all global deaths.

Read Next
‘Corona asking all of us to move on,’ says defense lawyer
EDITORS' PICK
The TECNO Camon 19 Series Philippine launch
Can’t control ‘ukay-ukay’ imports? Tulfo proposes legalizing it for taxes
SRA chief Serafica resigns following sugar importation mess
House energy committee chair Arroyo bats for cheap electricity
Tulfo questions BIR for going after online sellers instead of oil smugglers
Unleash the photographer in you this World Photography Day with vivo smartphones
MOST READ
Cherie Gil’s daughter on partying after mom’s death: ‘I’m grieving but it’s not my job to show you that’
1 dead, 2 hurt as old chopper crashes in Clark
LOOK: Mavy Legaspi gifts Carmina Villaroel with Hermes bag on her birthday
Tulfo grills BIR, BOC for going after online sellers instead of oil smugglers
Don't miss out on the latest news and information.