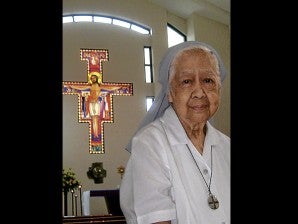 THE NUN’S STORY. Sr. Flor Maria Basa, FMM, at her convent’s chapel in Cavite with a reproduction of the Cross of San Damiano in stained glass in the background. MA. CERES P. DOYO

Abide by the will of God.

This was the advice given on Thursday by Sister Flory Basa to her estranged nephew-in-law, convicted Chief Justice Renato Corona.

The 90-year-old Franciscan missionary is one of the original owners of the company that Corona identified as the owner of the P34 million deposited in one of his bank accounts and the source of the P11 million he took out as cash advance.

Despite its multimillion-peso asset, 91 percent of Basa-Guidote Enterprise Inc. (BGEI), however, was sold at an auction for a mere P28,000 to his daughter, Carla Corona, the sole bidder.

“The only thing to do is to abide by the will of God. Everything that has happened is part of God’s plan for us,” Sister Flory said in an interview.

Sister Flory said God’s grace was also at work when Cristina, the ousted Chief Justice’s wife, hugged the Basa siblings—Ana, Carmen, Isabelle, Francesca and Eric—in reconciliation while the televised impeachment trial was on a break on May 25.

The siblings, children of Jose Maria Basa III who was convicted of libel for a public notice against his niece Cristina, came all the way from the United States and Canada to watch Corona take the witness stand on May 22.

In his long opening statement, Corona spoke of a family feud between the Basas and his wife over BGEI and a two-hectare land in Libis, Quezon City. He called Jose a spoiled brat and jobless, causing the Basa siblings much discomfort. The Basas and their cousin Cristina are embroiled in a protracted legal battle over the inherited properties.

But when a contrite Corona returned to the witness stand days after he walked out of the courtroom, the Basas and the Coronas reconciled.

“There was sincerity. They looked eye-to-eye. I felt that the Lord was talking to them, and I’m happy about that,” Sister Flory said of her nieces and nephew who have been estranged for almost 30 years.

Sister Flory said Ana had wanted to bring her to the Senate trial, but she declined. Instead, she watched the proceedings on television at the convent in Cavite.

Cristina’s mother, Asuncion, and Ana’s father, Jose, were among the five original owners of BGEI. The others were Mario Basa,  Sister Concepcion and Sister Flory, who is the only surviving owner.

On Tuesday, the Senate impeachment court found Corona guilty of culpable violation of the Constitution and betrayal of public trust for excluding in his statement of assets, liabilities and net worth his $2.4 million deposit in four bank accounts and P80 million worth of deposits in other banks which he said belonged to him and his relatives.

During the trial, Corona said he did not declare a P34-million  bank deposit in his SALN because it belonged to BGEI. The amount represented  the proceeds from the sale of a BGEI property in Sampaloc  to the city government of Manila.

But Ana said Corona used his legal connections to make sure Cristina would get to collect the proceeds of the sale as the alleged owner of BGEI.