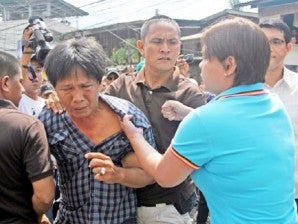 Davao City Mayor Sara Duterte is about to throw a punch to Sheriff Abe Andres during demolition work in a residential area in the city Friday. CONTRIBUTED PHOTO

MANILA, Philippines—For punching a sheriff, Davao City Mayor Sara Duterte may face slight to serious misconduct charges, the penalties for which range from reprimand to dismissal, the Department of Interior and Local Government said Friday.

Interior Secretary Jesse M. Robredo ordered an investigation into the case of Duterte who repeatedly punched a sheriff on Friday morning.

He said he was taken aback when he watched the incident in a cable TV newscast, but added that conclusions could not be drawn based on TV footage alone.

Robredo said Sheriff Abe Andres “should file a complaint” to give substance to the investigation, although he added that he could not judge how strong the case was, just based on what he had seen on the news. “Due process  requires first that the aggrieved party file a complaint,” he said.

An incensed Duterte was captured by TV news cameras punching Andres after the latter insisted on demolishing shanties in Agdao district, despite her request to hold it off for two hours while she negotiated with the squatters.

“I think the request to delay it by two hours was a reasonable request. It wasn’t a life or death situation. But what happened after that is a different story,” Robredo said by phone.

He said the fact-finding probe would be led by staff members from his office who would fly to Davao City on Monday. Robredo added that he would also talk to Duterte and Andres to get their side of the story.

“This will be a full-blown investigation like in the case of [Kalinga Governor] Jocel Baac,” who faced a similar probe after he assaulted radio commentator Jerome Tabanganay in his booth last month, Robredo said.

Baac’s actions were also captured by a camera that was live-streaming the broadcast online when he barged into Tabanganay’s booth.

Robredo said he could not give a time frame as to when the probe on Duterte would be completed, noting that he had wanted to finish the Baac case in 10 days. The secretary has submitted his recommendations to Malacañang on Baac, but the latter has not acted on it.