MANILA, Philippines — The ACT  Teachers Partylist warned Wednesday that public schools will continue to suffer from a shortage of teachers, classrooms, and water and sanitation facilities this school year after the national government failed to provide sufficient funds for state-run educational institutions. 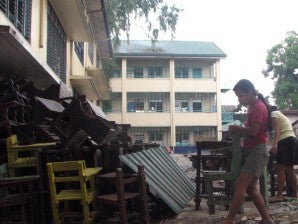 Citing figures from the Department of Education, ACT Teachers Partylist Representative Antonio Tinio said there would be 132,483 teachers, 97,685 classrooms, and 153,709 water and sanitation facilities less this schoolyear resulting from lack of fund support from the Aquino administration.

“The shortages will get worse this schoolyear because the Aquino administration has failed to provide sufficient funding in the 2012 national budget for the additional requirements of our public school system in School Year 2012-2013, including the needs of 1.6 million incoming kindergarten students,” said Tinio.

The legislator disputed the lower figures cited by Deped for teacher and classroom shortages, saying that it was because the department added contractual and volunteer teachers to augment the shortage.

“Deped claims that it will have the teacher shortage down to 11,620 by the end of this school year. But that’s only because they included over 49,000 contractual teachers funded by local government units and around 20,000 volunteer kindergarten teachers employed by Deped in their accounting,” Tinio said.

He also said these teachers were allegedly “generally grossly underpaid and deprived of basic workers’ benefits” because of their contractual status.

As to classrooms, Tinio claimed that the 30,000 to 40,000 classrooms Deped said they would be able to construct through a Public-Private Partnership, won’t be ready by June, adding that the effectiveness of the scheme has yet to be known.

He also said that the 21.5 million school children would continue to suffer unsanitary conditions in public schools, following the likewise alarming shortage in water and sanitation facilities.

“The bottom line is that the opening of the new schoolyear will show that the Aquino administration has failed to muster the political will and budgetary resources to substantially address, if not solve, the long-running shortages that continue to plague our public school system,” he said.