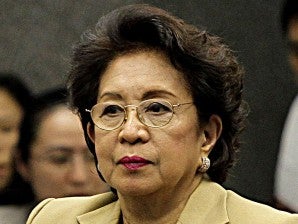 MANILA, Philippines – A hand grenade was recovered near the house of Ombudsman Conchita Carpio-Morales in Muntinlupa City Wednesday, police said.

Police said the live M-26 hand grenade was found inside a small canister left at the back perimeter fence near the gate of Morales’ residence at Carpio Compound, Soldiers’ Hills Village, Putatan, Muntinlupa.

Police said the package also contained a handwritten note which reads “Pang densa [sic] kay CCM — nagmamalasakit.” They have yet to identify the person who left the canister.

A concerned citizen called the Tactical Operations Office to report the grenade, San Jose said, adding that they were able to respond just about two to three minutes later as the area was near to their station.

San Jose said the explosive was contained around 5:30 p.m.

A security camera was installed at the gate of Morales’ house, and police were hoping it was able to capture the area where the grenade was found.