New Chief Justice must be an outsider—ex-Solicitor General Chavez

This was how former Solicitor General Frank Chavez, in an interview early Wednesday over Radyo Inquirer, described an ideal replacement for impeached Chief Justice Renato Corona.

The new Chief Justice, he said, must therefore come from the outside. 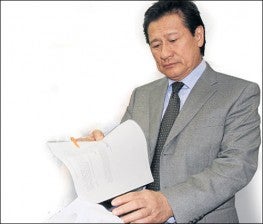 Asked what are the basic qualifications to become Chief Justice, he said the candidate must have at least 10 years of law practice and have to be of good moral character.

“If you ask me, there are many candidates from the Court of Appeals and the private sector. The President (Benigno Aquino III) can choose the best, the one without agenda,” he said.

He pointed out the ideal age could be around 64 to 65 years old. “So you have five years to go. By that time, if you’re in the private sector, you’re already made,” he said. The retirement age for a Chief Justice is 70 years old.

Then again, he warned the President of groups lobbying for the position he likened to hyenas.

“May nadaleng carcass kaya pag-aagawan na naman yan. (There’s a carcass in the open, now they’re all after it).

In the same interview, Chavez also tackled a few highlights in the proceedings on the final day of the trial. He said despite the solemnity and seriousness of the moment, he found some “flaws,” like the reading of the penalties after the verdict was given.

Referring the “immediately executory” decision on Corona’s fall from power, in a light-hearted manner Chavez likened the Senate acting as impeachment court “not only to an ugly woman but to an extremely ugly woman who has no appeal.”

For more, listen to the full interview at the attached audio clip from Radyo Inquirer.  Totel V. de Jesus, INQUIRER.net

Read Next
Corona staff given a month pack and leave
EDITORS' PICK
Karding damage to infrastructure at P23M
Bongbong Marcos says PH ‘open for business’ with new Clark Airport terminal
Sierra Madre stands up to Karding, but needs protection vs the humans it saves
Reignite your passion with the vivo Y35
House energy committee chair Arroyo bats for cheap electricity
UNFPA Philippines Career Opportunities
MOST READ
Badoy not with Office of the President, NTF-Elcac, under Marcos admin — solon
Angelica Panganiban ‘duguan, sugatang mom’ one week into breastfeeding
Maja Salvador to star in new ABS-CBN TV series with Richard Gutierrez
Kris Aquino offers help for Lolit Solis’ dialysis needs amid her own illnesses
Don't miss out on the latest news and information.