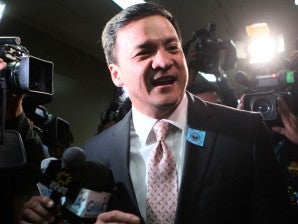 Jose Midas Marquez, who became the voice and face of the Supreme Court since 2007, has vacated his post as chief of the Public Information Office of the high tribunal.

Described by some as arguably the most “media-friendly” spokesperson the court ever had, Marquez declined to speak with members of the media who trooped to the Supreme Court Wednesday.

“I will no longer speak for the Supreme Court,” a smiling Marquez briefly told reporters as he entered the high court’s building in Manila.

“I’m coterminous with Chief Justice (Renato) Corona. I’m moving to my official function as court administrator,” he said in a text message.

Corona was dismissed as Chief Justice on Tuesday after the Senate impeachment court found him guilty of culpable violation of the Constitution for not declaring at least P180 million in dollar and peso deposits.

At a news briefing, Guerra said her designation was just in an acting capacity as President Benigno Aquino III had yet to name Corona’s successor.

But Guerra said Marquez would continue to function as head of the tribunal’s Office of the Court Administrator.

“The position of chief PIO (public information officer) is just a designation because his appointment is really as court administrator. (His being a spokesperson) was just an additional duty,” Guerra said.

“As he said to us, it’s already overtime or overdue that he gives up the duties.”

Marquez, a former staff member of retired Chief Justice Reynato Puno, succeeded Jose Portugal Perez as court administrator when the latter was appointed associate justice of the Supreme Court in 2010.

As court administrator, Marquez is technically considered a “justice,” having administrative supervision over some 2,000 justices and judges of first-and second-level courts and about 27,000 court workers. With Tetch Torres, INQUIRER.net