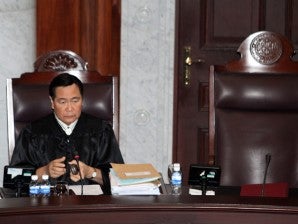 MANILA, Philippines — Senior Associate Justice Antonio Carpio will be the acting Chief Justice after incumbent Renato Corona was removed from office following his conviction by the Senate impeachment court.

Corona was removed frrom office ffective immediately after he was found guilty of non-disclosure of his statement of assets, liabilities and networth (SALN).

Carpio’s takeover in acting capacity is contained in Rule 2, Section 2 of Administrative Matter No. 10-4-20-SC or the Internal Rules of the Supreme Court states that “in the absence of the Chief Justice, the most senior Associate Justice present shall chair the session of the court.”

Under the same Rule, specifically Rule 5 states that aside from the Chief Justice who presides over all the other members of the Court, the other Associate Justices “shall have precedence according to the order of their appointments as officially transmitted to the Supreme Court.”

Carpio was the closest rival of Corona on 2010 for the Chief Justice position but withdrew his nomination, saying he will only accept if the next President will be the one to appoint the Chief Justice. He maintains that Arroyo is covered by the constitutional prohibition on making appointments two months before the elections.

Traditionally, it is the most senior associate justice who gets to be appointed. After Carpio withdrew, Corona was appointed Chief Justice by virtue of being next in line.