Trillanes votes to convict Corona ‘in the interest of the country’ 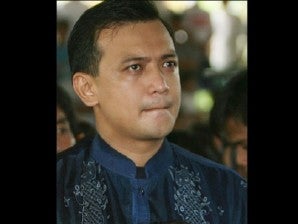 MANILA, Philippines – Senator Antonio Trillanes IV voted to convict Chief Justice Renato Corona Tuesday, saying that “it is in the interest of the country to convict Renato Corona.”

Trillanes said that Corona’s claim on why he did not fully disclose his assets “will never be accepted as alibis.”

Corona testified that he did not declare his $2 million deposits because it was “absolutely confidential” under the Foreign Currency Deposits Act.

Trillanes said that “to interpret the confidentiality clause [that way] is erroneous, self-serving and an afterthought.”

Corona also said that the more than P80 million deposits were also not declared in his SALN because it was “co-mingled” funds composed of money from his wife’s corporation and his children.

Trillanes said that a conviction “signifies that our system of check and balances is working well and that Impeachment can now be effectively used as a tool of the state to make high government officials accountable for their actions.”

“From now on, no one is untouchable,” Trillanes said.

It would also mean that “we have considerably raised the standards for a Chief Justice of the Supreme Court,” Trillanes said.

“The Chief Justice must have unquestionable moral integrity and strength of character to render him impervious to corruption and political pressure as he administers justice for our country and people,” Trillanes said.