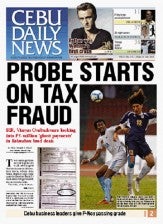 The Office of the Ombudsman in the Visayas docketed the case for fact-finding.

Deputy Ombudsman Pelagio Apostol said he would start the inquiry based on the Cebu Daily News’ banner story about the fraudulent practice.

The Balamban municipal assessor and two employees were identified in at least 100 transactions by lot buyers who had relied on them to remit payments of capital gains tax to the Bureau of Internal Revenue (BIR).

The forms, however, turned out to be fake.

The deposit slips appeared to be forms of the Land Bank of the Philippines.

Several lot owners had earlier gone to the BIR office in Mandaue, where they discovered that bank deposit slips in their possession as proof of payment were fake.

Tan said he was alarmed by the discovery and was happy it was published in the newspaper to alert the public that this kind of swindling was going on.

“For a start, I suggest that people deal with authorized persons only.

Tan urged victims to file cases against the Balamban town employees who were identified as the ones who facilitated payments for lot owners, who relied on them to go to Cebu City to deposit the cash with the Land Bank of the Philippines.

“The investigation will take time but at least we have two affidavits of complainants already. We can start from there,” said Tan.

He sent a memo to the chief of the legal division to direct Revenue District Office chief Evangeline Abanilla to investigate.

He also directed BIR Special Investigation Division chief Zennen A. Tabanao to coordinate with the local authorities, including the National Bureau of Investigation.

Mayor Ace Binghay, who asked his Human Resources officer to look into the complaints, called off the probe and referred it to the Civil Service Commission last Wednesday after getting complaints from quarters who suspected the efforts were biased.

The initial findings of the HR officer Napoleon Moralde showed that out of a review of 300 land transactions since 2009, at least 100 involved fake deposit slips for BIR tax payments in amounts of P3,000 to P30,000.

The chief of the municipal assessor’s office Tita Yray and two of her staff Sharee Melgar and Lucelle Agua were identified by complainants. The mayor reassigned them to other offices for the time being.