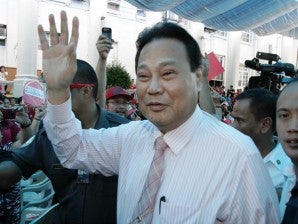 MANILA, Philippines—Chief Justice Renato Corona’s fate now hangs on 23 senators, who sit as judges in the impeachment trial of Corona that started on January 16, 2012 and ended on Monday, May 28, 2012.

After holding trials for 43 days, the Senate, acting as an impeachment court, is ready to give its verdict at 2:00 p.m. Tuesday.

At least sixteen votes or two-thirds of the total membership of the Senate are needed to convict the Chief Justice while only eight votes to acquit him.

This will be the first in history that the Senate render judgment to the highest magistrate of the country.

Corona’s ordeal started when 188 members of the House of Representatives signed the impeachment case on December 11, 2011 and immediately filed the same before the Senate the following day.

On January 16, 2012, the Senate formally convened itself as an impeachment court and started hearing and receiving the evidence presented by the prosecution team against Corona.

The three charges that the prosecutors decided to pursue against Corona were the following:

Article II- Corona’s alleged failure to disclose to the public his statement of assets, liabilities and net worth (SALN) as required under Section 17, Article XI of the 1987 Constitution

Article III- His alleged failure to meet and observe the stringent standards under the Constitution that provided that a member of the judiciary must be a person of proven competence, integrity, probity and independence in allowing the Supreme Court to act on mere letters filed by a counsel which causes the issuance of flip-flopping decisions in final and executory cases; in creating an excessive entanglement with Mrs. Arroyo through her appointment of his wife to office; and in discussing with litigants cases ending in the Supreme Court

Article VII- His alleged partiality in granting a temporary restraining order in favor of Mrs. Arroyo (Former President and now Pampanga Rep. Gloria Macapagal Arroyo)and her husband (Mike Arroyo) in order to give them an opportunity to escape prosecution and to frustrate the ends of justice, and in distorting the Supreme Court decision on the effectivity of the TR0 in view of a clear failure to comply with the conditions of the Supreme Court’s own TRO.

Of the three charges, the prosecution team dealt heavily on Article 2 when it exposed a list of 45 properties allegedly in the name of Corona and other family members.

But when the prosecutors presented to the Senate the source of the list, Land Registration Authority administrator Eulalio Diaz III and Tupas himself admitted that only 24 properties, and not 45, were in the name of Corona and his family members.

Instead, Corona’s camp presented witnesses and evidence to show that he had only five properties and all were declared in his SALN.

One of the highlights in the trial was the issue of multi-million dollar bank accounts that were also in the name of the Chief Justice.

Bank officials were subpoenaed by the Senate after the prosecution team submitted certain bank records pertaining to Corona’s alleged dollar accounts. The prosecutors claimed the documents were provided to them by a ‘small lady.’

But the Philippine Savings Bank wherein Corona allegedly maintained dollar accounts immediately brought the issue before the Supreme Court, which immediately issued a temporary restraining order against any discussion of the dollar accounts.

The Senate decided to obey the high tribunal.

While the trial was on a month long break in April, however, Ombudsman Conchita Carpio-Morales ordered a probe into the alleged $12 million that Corona had allegedly owned.

So when the trial resumed in May, Corona’s defense lawyer, Jose Roy III, dared the Ombudsman and other personalities to take the witness stand. In return, the defense lawyer promised that Corona will testify in his own trial.

Carpio-Morales took the challenge and testified before the Senate on May 14.

In her testimony, the Ombudsman revealed that Corona had at least $12 million deposits in 82 dollar accounts based on a 17-page report that the Anti-Money Laundering Council furnished to her.

On May 21, 2012, Corona appeared for the first time in the trial to belie all the allegations hurled at him.

After his testimony, the defense team rested the case. Both the defense and prosecution panels then immediately proceeded with their formal offer of evidence and presented their final oral arguments Monday, May 28, 2012.

So the lingering question in millions of Filipinos here and abroad, for not declaring his $2.4 million and P80 million “co-mingled” funds in his SALN, is Corona going to be removed from office?