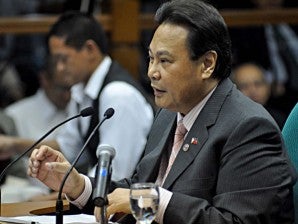 MANILA, Philippines — Although senators are supposed to vote “guilty” or “not guilty” in the impeachment case of Chief Justice Renato Corona, some might decide to abstain from voting because they are unable to determine with certainty, based on available evidence, if Corona is guilty or innocent, according to impeachment analyst Romulo Macalintal.

Macalintal, an election lawyer, predicted such a scenario, citing the “thunderous silence” demonstrated by some senators during the entire impeachment proceedings.

The lawyer noted that the voting on the impeachment case would not be by simple majority but, in political parlance, by supermajority.

“In other words, a senator may abstain or not vote at all in any of the articles of impeachment for which Corona is being charged,” he said in a statement. He added that such an abstention “will have the effect as a vote against the impeachment or equivalent to a ‘not guilty’ vote.”

The constitution and the Senate’s rules on the impeachment provide that the respondent official may be convicted or acquitted by the vote of “two-thirds of all Members of the Senate.” The rules do not specifically state if senators who are absent or who abstain from voting are included in the determination of how many comprise the two-thirds.

The rules also do not specifically state if vacant seats are included in the calculation of the two-thirds super majority. Senate President Juan Ponce Enrile, however, earlier said since there were only 23 senators, the super majority would be 16 votes, which is also the same if there were 24 senators.

Macalintal said that in the European Union and some European legislatures, the calculation of a majority or super majority would include those absent from the session and those abstaining from voting.

The lawyer said he still had no inkling how the senators would vote.

“Judging from the body language and manifestations before the Senate and the press statements made by some senator-judges, it appears that a great number of the 23 senators have not yet made up their minds on how they will cast their votes,” Macalintal said.

He added that the senators might or might not be influenced by the oral arguments to be made by the prosecution and the defense panels.

“They may have their own standards in making their decisions because in impeachment, there is no standard of proof required to be complied with by any of the senator-judges in rendering their individual verdict. They could decide on the basis of the ‘product of his own mind’ as succinctly declared by Senate President Enrile in one of the proceedings of the trial,” he explained.

“In other words, the decision of any senator-judge may not be based on whether the guilt or innocence of Corona is proved beyond reasonable doubt or substantial evidence, but could be founded solely on the sound discretion or perception of a senator,” he added.