AQUINO REPORTS TO THE BOSS. President Benigno Aquino III, on his first year in office, reports the achievements of his administration and stresses that the Filipinos are still his boss in a speech at the Ultra in Pasig city Thursday. RTVM/CONTRIBUTED VIDEO. | Part 2 | Part 3 | 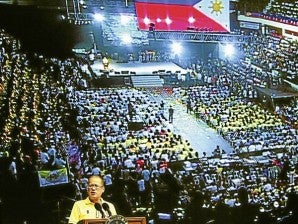 AQUINO YEAR ONE. President Benigno Aquino III cites his greatest achievement was the transformation in people’s attitude in his speech at the Philippine Sports Arena in Pasig City on Thursday. EDWIN BACASMAS

Marking his first year in office, President Benigno Aquino III said that his “greatest achievement” so far was the transformation in people’s attitude from apathy to that of caring and active citizens.

“Before, there was resignation, dejection and apathy,” the President told reporters.

“If you remember at the time, you were writing about the people’s apathy and numbness, as if they did not expect anything from their government. They were blasé to scandals that were being unearthed,” he said.

“Now, more people are expectant that their lives are changing for the better,” Mr. Aquino said.

He said growing demands for change from the people were a good thing.

Mr. Aquino won the presidency pledging to crush corruption and reduce poverty. But he has seen his public approval ratings drop in recent months, which analysts say reflects popular disappointment over the slow pace of progress.

“I am aware that you have given me a passing mark, but that you expect perfection from me. That is good in a way so it would push us to intensify our efforts,” he said.

At the Philippine Sports Arena (formerly Ultra) in Pasig City, the celebration of his first year in office was marked with speeches from local officials and music from rock-rap bands like Gloc 9 and even a song sang and composed by actor Cesar Montano—all calling for people to be united behind the administration.

But Mr. Aquino’s speech was not music to the ears of former President Gloria Macapagal-Arroyo, who he said was “blind and deaf to the people’s cries.”

He said uncovering scams and fixing problems left behind by his predecessor continued to be the preoccupation of his administration.

He pointed out the Arroyo administration left agencies like the National Food Authority (NFA) with billions of pesos.

He said that NFA debts rose from P18 billion in the first year of Arroyo as president to a whopping P177 billion in her last year in office.

He also mentioned the scam uncovered at the Philippine Charity Sweepstakes Office (PCSO), noting that the Arroyo administration had spent more money to “advertise the face of politicians on television but had no money to pay for the P3 billion it owes to government hospitals.”

“Because of this debt that could not be paid, because of corruption the hospitals that the government provides funds for does not longer want to accept guarantees from its fellow government office,” Mr. Aquino said.

Gloria Arroyo my opposite

He said unearthing this kind of irregularity was the change that his administration continued to push for.

“I will no longer spend time clashing with them. I thank Arroyo for admitting that she is my opposite. At last, on this point we have come to an agreement,” he said.

The President was reiterating a statement he made last week after Arroyo said that the gains of her presidency were in danger of being eroded because there was “nobody-home” in the new administration.

Responding to Arroyo’s tirade against him, Mr. Aquino said his administration had done a lot to help the people. He said he would let the people respond to the charges hurled against him that he did not do enough for them.

These include the 21,800 families of policemen and soldiers who will have decent homes before the year ends, the 2 million poor families set to benefit from the conditional cash transfer program and the 240,000 farmers who will benefit from 2,000-kilometer farm-to-market roads finished in just one year, Mr. Aquino said.

“Isn’t it clear that there is change?” he said.

He said that because of reforms in the government financial system, the government was able to save funds more than the amounts allocated by the General Appropriations Act to implement programs, the President said.

These include providing P12 billion for the “Pantawid Pasada” for transport workers affected by high oil prices, he said.

“Housing, rice, security, salaries, roads, Pantawid Pasada and other lifeguards for the people drowning from poverty. These are the changes that we are reaping now,” he said.

All these became possible because the President said his administration “went after the crooks in government, fixed the government’s finances and crooked system.”

He said the country made considerable progress in just one year and that it could move further in the next five years of his watch.

Mr. Aquino did not want to comment when asked what grade he would give his administration in its first year.

“With our mandate from the people, and our commitment to uphold our people’s expectation that they are our boss, the Aquino administration will not be cowed. We are living in a different neighborhood now, where our people are assured that justice is being served; and where those responsible for the suffering we have all endured for almost a decade will be held accountable,’’ presidential spokesperson Edwin Lacierda said in a statement.

“We have already begun to establish the necessary reforms and no amount of naysaying will derail us from the straight and righteous path. If anything, these orchestrated attacks against the accomplishments of this new system of good governance only strengthen our resolve to continue building on our successes of the past year,’’ Lacierda also said.

Lacierda summed up the achievements of the administration, which he said included “several upgrades in our credit ratings landmark policies and laws for economic and political reform, increased private domestic investments, hundreds of thousands of jobs generated leading to a decrease in unemployment.”

He said these were “proof that our people’s optimism is well founded.”

Continually blaming the Arroyo administration for the country’s troubles did not sit well with some people.

While Gordon Alan Joseph, president of the Cebu Business Club, believed that the corruption in the past should be investigated to give justice to every Filipino, it was time for the President to move forward.

“He must start showing his leadership now. He has to perform and shouldn’t just keep on blaming the previous President,” Joseph said.

Joseph said he saw honesty in the Aquino administration but added that this was not enough.

While giving Mr. Aquino a passing grade in his first year of office, he asked him to perform instead of blaming the previous administration.

Joseph said his group would just give Mr. Aquino’s first year performance an average grade because nothing happened to his anticorruption campaign and his private-public partnership programs.

“No one has been prosecuted in his anti-corruption drive. I do not see any progress in his PPP programs. But we are going to give him a chance,” he said.

Southern Leyte Rep. Roger Mercado gave the administration a grade of 75, saying there was no concrete framework where the country would be going.

“He may have the best intention in purging corruption but it is wanting in immediate solutions,” Mercado said. With reports from Jhunnex Napallacan and Jani Arnaiz, Inquirer Visayas; and AFP