Basas happy about reconciliation but issues still have to be resolved 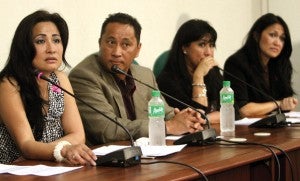 MANILA, Philippines—The dramatic reconciliation in the Senate between the Basa family and their estranged relatives, the Coronas, is just the first step in a long journey of healing and reconciliation, according to the Basa siblings.

The Basas—Ana, Eric, Carmen, Isabelle and Francesca—said in a statement Saturday that there remain issues concerning their family that have to be addressed, even as they try to heal the rift that had divided them for three decades.

“This will be a long journey of healing and reconciliation. It will take time and it may be a painful process for all involved in light of the 30 years of pain preceding it,” the Basa siblings said in the statement.

They said they want to clear their family and father’s name and right the falsehoods hurled at them.

“There are still fundamental differences that have to be addressed, including the damaging statements, falsehoods and accusations against our family, the probate of our Lola Charing (Rosario Basa), court convictions, BGEI stock and financial issues, and, most especially, clearing the tarnished good name of our father, Jose Ma. Basa III. The truth must be made evident,” they said.

The Basas are embroiled in legal battles with their cousin Cristina, wife of Chief Justice Renato Corona, over the family’s properties. The dispute between the cousins  was dragged into the chief justice’s impeachment trial when he said that the money in one of the bank accounts belonged to the Basa Guidote Enterprises Inc. of Cristina’s family.

The Basas, who reside in the United States, flew in for Corona’s appearance at the his trial on Tuesday, and listened as the magistrate said it was their father, Jose Maria Basa III, who had oppressed Cristina’s mother and her family, and described him as an unemployed man and a “spoiled brat.”

The Basas tearfully refuted Corona’s statements, and said their father was a farmer who provided for his children. But they also wished for the family’s troubles to be over.

But during a break in Corona’s second appearance at his trial on Friday, Cristina was seen approaching the Basas and embracing them. Later, the Basas approached the chief justice and exchanged hugs with him as well.

In their brief statement Saturday, the Basas said they were glad about the positive turn of events in the family relations.

“We are happy that our pursuit for peace within our family is finally becoming a reality. As we have said in past interviews, this has been a long struggle for us,” they said.

They said they were glad that their aunt Sister Flory Basa’s message was well received by the Coronas.

“We are grateful to the Lord that He has touched their hearts and appreciate the initiative they displayed at the Senate Impeachment Court last Friday to mend our broken relationship,” they said.

As for the impeachment, they were leaving it in the Senate’s hands. They also hope the country would find peace and would be successful in its quest for true justice.

“We fully support the efforts in the search for the truth. The impeachment is in the hands of the senator judges. Ultimately, the determination as to whether or not Chief Justice Renato Corona is fit to remain in office must be made based on the evidence presented in court and what is best for the country and the good of the people,” they said.

Read Next
Some marriages are not meant to be, says retired bishop
EDITORS' PICK
Heads may roll at BOC, says Palace if sugar smugglers are allowed to use recycled import permits
What to watch out for when selecting a video surveillance solution
DOH reports increase in daily COVID-19 deaths, mostly unvaxxed
House energy committee chair Arroyo bats for cheap electricity
vivo brings to the Philippines a powerful smartphone with a slimmer body, the vivo Y02s for only PHP 6,499
Palace: Biggest supermarkets in PH commit to sell sugar at P70 per kilo
MOST READ
Metro Manila’s No. 1 wanted man arrested, says NCRPO
Alyssa Valdez to miss Creamline’s AVC Cup campaign
Peso loses ground vs US dollar
Mayor bares issues vs closed QC school
Don't miss out on the latest news and information.