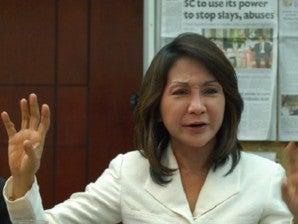 The elder Garcia admitted the move of his daughter Gwendolyn was a first step toward fulfilling her intention to run for senator under the United Nationalist Alliance (UNA), which is composed of the PDP-Laban and the Pwersa ng Masang Pilipino (PMP) of former President Joseph Estrada.

He said her daughter was invited to join the party of the vice president and she decided to accept the offer. “She consulted me about her decision to join the PDP-Laban party and I fully supported her,” he added.

The lawmaker said he was happy for his daughter as he believed that the move boded well for her senatorial bid.

The oath-taking took place at 10 a.m. Friday at the Executive Lounge of the Cojuangco & Sons Bldg. in Makati City.

With the governor now a member of PDP-Laban, her party in the province, One Cebu, would affiliate with the PDP-Laban and eventually the UNA Coalition for the coming election, Sepulveda said.

In return, officers of One Cebu expected the national party to recognize their local candidates in the next election, he added.