Prosecution scoffs: Too little, too late, useless
By: Christian V. Esguerra, Leila B. Salaverria - @inquirerdotnet
Philippine Daily Inquirer / 01:36 AM May 26, 2012 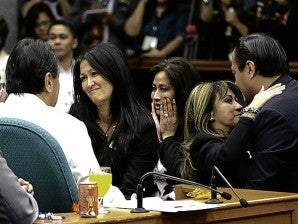 LIKE LONG LOST RELATIVES. While the senator-judges huddle in a caucus to resolve an issue, real-life drama unfolds with a happy ending. The children of Jose Maria Basa III—Francesca, Ana and Isabel—approach Chief Justice Renato Corona and his son Francis (at right) at the witness stand moments after they kissed and made up with their estranged first cousin, Cristina Corona. SENATE POOL

With only a handful of lawmakers taking his challenge, Chief Justice Renato Corona on Friday submitted an unconditional waiver authorizing scrutiny of all his bank accounts, but the Senate tribunal rejected the move, saying it was a hearer, not a provider, of evidence.

At the close of Day 42 of the four-month impeachment trial, Senate President Juan Ponce Enrile announced the tribunal considered case submitted for resolution and a decision would be rendered after the closing oral arguments by the two sides on Monday, or on Tuesday.

“I will no longer wait for the waivers of the 189 (lawmakers). I’m submitting this without any conditions whatsoever,” Corona said.

House prosecutors, who had been demanding the waiver, showed little interest.

They scoffed at Corona’s submission of the unconditional waiver.

“It’s too little, too late,” Rep. Juan Edgardo Angara said in a press briefing. “It’s too late in the day and it’s not necessary.”

Deputy Speaker Lorenzo Tañada III said Corona had already admitted in his testimony that he had dollar accounts and did not include them in his statement of assets, liabilities and net worth (SALN).

Because of this admission, the prosecutors believed whatever the waiver would produce would be useless.

Earlier, Corona signed the waiver on his bank accounts but said he wanted all 188 complainants against him plus Sen. Franklin Drilon to do the same first. Except for four, the lawmakers rejected his challenge and branded the move as a stunt. On Friday, Corona said he was making an unconditional waiver.

Corona said deposits in his bank accounts were “co-mingled” and included funds from his wife’s family corporation, Basa-Guidote Enterprises, and his children.

Corona also failed to present a plausible explanation as to why some of his real properties were not declared in his SALN for six years, Quimbo said. What Corona gave was just his open denial and narration, he pointed out.

“There is no evidence in the face of our documentary evidence. So what is the use of the waiver at this point in time?” he said.

“I’m confused,” Sen. Francis Escudero told the prosecution, noting that senators had to vote on whether to respect the Supreme Court’s temporary restraining order on Corona’s dollar accounts. “But now that it’s opened, it seems that no one is interested all of a sudden. I cannot understand that… I’m urging both sides, for the sake of the country and the public, to make use of this opportunity.”

Rep. Niel Tupas Jr., the lead House prosecutor, said his camp would rely on the report by the Anti-Money Laundering Council (AMLC), which formed the substance of Ombudsman Morales’ previous testimony. The defense has questioned the validity of the AMLC report, which, according to Morales, showed Corona had amassed from $10 million to $12 million in 82 accounts in five banks.

Corona returned to the witness stand against the advice of his doctors and profusely apologized to senators and the public for abruptly leaving the trial on Tuesday.

He said it was not a “protest or walkout,” noting that he still had two pages remaining in his opening statement, which he failed to read despite spending three hours on the floor.

“I was in a total state of confusion,” said Corona. “Because of my confusion, I felt that I was about to throw up and I didn’t want that to happen in front of the cameras,” he said.

“I’m humbly asking for forgiveness from the entire Senate, from our people, from the prosecution and the defense. You know what we have been going through for almost six months. What we’re going through is not easy. It’s very hard to describe the pain.”

A hep-lock was still protruding from Corona’s left hand, a precaution in case he would need intravenous fluid in the course of his testimony.

“I still feel weak but I would try my best,” he said when asked by Enrile, the court’s presiding officer, if he was fit to take the stand.

Court a hearer of facts

Enrile accepted Corona’s apology and said the impeachment court was taking judicial notice of his medical condition as revealed by his doctors through the media.

Corona submitted the waiver on his assets before fielding questions from senator-judges for about two hours. The move prompted senators to halt the proceedings and tackle the matter in caucus for more than 30 minutes.

When the session resumed, Enrile told the Chief Justice that the court would only take “note of the waiver, but we can’t act on it.”

Corona first mentioned the waiver last Tuesday, authorizing all banking institutions, the Bureau of Internal Revenue, Securities and Exchange Commission, Land Registration Authority, and the AMLC to disclose to the public any information about his assets, business interests and financial connections.

The waiver also allowed the Supreme Court clerk of court, with permission from the court en banc, to produce his statements of assets, liabilities and net worth (SALNs) covering 2002 to 2011.

Quimbo said that whatever results the waiver would produce would have no use because the AMLC report had already been able to show Corona’s bank accounts.

Quimbo also said that if Corona wanted to be transparent, he should have issued the waiver much earlier when prosecutors were dealing with bank officials to get his bank records.

The waiver was also a last-ditch attempt to prolong the trial, which was scheduled to end on Friday, the prosecution said.

Quimbo said the unconditional waiver was part of the defense’s strategy, which was being “perpetually” adjusted, “in their desperate attempt to win over the overwhelming sentiment against the Chief Justice.”

Best cross is no cross

He also said the prosecution’s decision not to cross-examine the Chief Justice was a point in its favor. The prosecution was so confident about its evidence that it was willing to abandon its long hours of preparation for Corona’s appearance on the witness stand, he said.

The 63-year-old Corona arrived at the Senate less than an hour before the trial was to open at 2 p.m. He was taken there in an ambulance accompanied by a team of doctors from The Medical City in Pasig City, where he was brought after his appearance in the Senate on Tuesday.

Before he left to testify,  Corona signed a waiver which freed The Medical City of any liability for any “foreseen and unforeseen consequences” that may arise from his decision to resume his testimony in spite of warnings by doctors he risked an “acute coronary syndrome,” or heart attack.

“My attending physicians have explained in a language and manner easily understood by me, the dangers of leaving the hospital in my condition but I insist that I be allowed to leave,” he said in the waiver released by the hospital to reporters.

Corona walked slowly toward the witness stand, his left hand clutching the shoulder of his wife Cristina with the other hand on the shoulder of an aide. During the entire week preceding his first appearance in the Senate, Corona said he barely slept. On Tuesday, he said he took the witness stand having not slept at all and having eaten very little.

“My situation was not easy. Millions of our people are watching, judging me in this trial,” he said.

Before adjourning on Friday, the court admitted the defense’s formal offer of documentary evidence consisting of 267 exhibits contained in a 74-page summary. The prosecution, which needs 16 votes in the 23-member chamber to convict Corona, also submitted additional evidence to support its allegation that Corona fabricated entries in his SALN.

Secretary Edwin Lacierda, President Aquino’s spokesperson, said the Office of the Ombudsman has a pending investigation into Corona’s assets.

“If he is convicted (by the Senate tribunal), and he is removed, the only penalty in an impeachment case is …  disqualification from public office. It does not speak of any criminal liability,” Lacierda told reporters. He said the Ombudsman could pursue the case of ill-gotten wealth depending on evidence.

“[The] presumption of ill-gotten wealth has arisen because of the discrepancy in his income,” he said. With reports from Norman Bordadora, Niña Calleja, Philippine Daily Inquirer and Maila Ager, INQUIRER.net