‘Corona will return’ against doctors’ advice 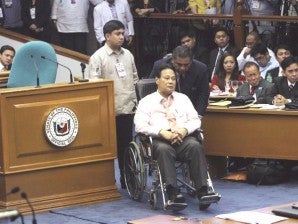 Against his doctors’ advice, Chief Justice Renato Corona is returning to the Senate impeachment court Friday amid warnings from his lawyers that the trial would be tarnished with illegality if the defense was forced to rest its case prematurely.

Corona’s doctors at The Medical City in Pasig imposed the condition that if Corona goes back to the Senate trial, he would have to sign a waiver stating it would be his own responsibility if he suffered a heart attack while outside the hospital.

Corona, who has been confined at the hospital since Tuesday night, signed the waiver.

Speaking to reporters, the chief defense counsel, Serafin Cuevas, said in Filipino that he had told Corona that  he could not avoid going to the Senate because “the judges might think that you’re not giving them enough information.”

“We were able to convince him,” Cuevas said.

Pressed if Corona would definitely be at the Senate, Cuevas said: “Yes, he will be there.”

Corona’s doctors told a news conference that while  the Chief Justice’s condition was “stable” and while his blood sugar and kidney functions were also “stable,” they advised him against leaving the hospital and attending the Senate hearing since this “will pose a risk” to his cardiac status.

“Purely on the basis of his medical condition, therefore, the team has reservations about exposing him to the risk of an acute coronary event,” read a medical bulletin released to reporters around 3 p.m.

Dr. Michael Villa, an endocrinologist, said that, as of press time, Corona was attached to an “intravenous line” but that this would be removed later in the day.

“If there are no events tonight, there will be no IV fluid (utilized),” he said.  “If his cardiac status deteriorates tonight, we will put another line.”

A diabetic, Corona was brought to the hospital complaining of dizziness after his court appearance on Tuesday. He is said to have suffered from hypoglycemia, which occurs when the blood sugar drops below normal levels.

Dr. Mariann Almajar, a cardiologist, said the doctors planned to transfer Corona from the intensive care unit to a regular patient’s room “anytime this (Thursday) afternoon.”

According to Dr. Eugenio Jose Ramos, senior vice president of the medical services group of the hospital, should the Chief Justice decide to leave and attend his trial, “we will just abide.”

“But, of course, he will have to sign a waiver,” Ramos added.

Ramos said that Corona  “has to take responsibility” should he be exposed to “an acute coronary event” outside the hospital.

In his waiver, Corona said he was aware of “the possible complications (and) dangers” to his health posed by his leaving the hospital, “but I insist that I be allowed to leave.”

“I am voluntarily going out-on-pass … to attend the Senate hearing and I take full responsibility for my actions,” Corona added, absolving the hospital and its staff of liability “for any foreseen and unforeseen consequences.”

Should Corona leave the hospital, a  medical team composed of two attending physicians and one intensivist will accompany him,  Ramos said.

He added that if this was the case, Corona would be taken to the Senate from the hospital in an ambulance “fully equipped according to his needs.”

After the Senate hearing on Friday, he said that Corona would go back to the hospital since “a number of tests,” such as a coronary angiogram, had yet to be done.

Senate President Juan Ponce Enrile has scheduled the final oral arguments by the defense and the prosecution for Monday even if Corona fails to show up this afternoon. He said Corona’s three-hour opening statement last Tuesday would just be admitted into the records.

Cuevas warned of a possible legal “infirmity” if the defense would be forced to rest its case, given Corona’s condition.

“It’s up to them but there would be some sort of illegality and infirmity because we’re not violating (any law),” he said in Filipino.

“We have no alternative but to comply (with the order for Corona to appear) because if we cite a reason, we might be accused of delaying (the proceedings),” Cuevas said. “But if we would be forced to present, if our evidence would be considered closed, there might be a legal problem.”

He added: “What if we cannot do anything anymore? All we have to do is resort to what the law and the Constitution allow us … There’s no reason for the court to issue a pronouncement that our evidence will be considered closed. It might be a ground, there might be a reason to have an infirmity in the proceedings.”

Cuevas visited Corona at the hospital where defense lawyers were advised by doctors about their reservation at discharging the Chief Justice.

“We promised the honorable impeachment court that we would do everything within our command (to follow) its order, to show them that there’s no reason for us not to comply with the condition and direction of the impeachment court,” Cuevas said in an interview on   dzXL radio.

Cuevas could not tell for sure how fit Corona would be at the witness stand.

“It depends. If he cannot intelligibly and mentally and physically be able to answer the questions of the court, I wonder what the court will do,” he said. “But we are placing him at the disposal of the court in obedience to the order.”

Before Cuevas confirmed that Corona would go back to the Senate Friday, defense lawyer Tranquil Salvador III said that while the Chief Justice was willing to return to the trial, “willingness is one (and) presence is another.”

Should Corona fail to appear, Salvador floated the idea of the court conducting a “video deposition,” wherein senator-judges could propound questions to him at the hospital through video.

Salvador said this was his “personal idea” and he would raise this with the rest of the defense team.

Lacson said it was “highly improbable” for a deposition to be granted. “The same cannot be applied to the Chief Justice since he already appeared before the impeachment court and even gave his narrative testimony,” he said in a text message.

Depositions and written interrogatories may apply to individuals suffering from an illness that has kept him or her from testifying in court, he added.

Drilon agreed: “There is no basis for a deposition because you only depose where the witness cannot appear. Here, he appeared and that is why a cross-examination is being asked for.”

Osmeña said Corona should be cross-examined to test the accuracy of his testimony, which he said was “full of half truths and self-serving statements.”

Pangilinan said a deposition would further delay the proceedings.

“A deposition, if requested and granted, may lead to further delaying the resolution of the case. It is therefore farfetched that we will move the scheduled closing argument on Monday in order to accommodate this,” Pangilinan said in a text message.

Salvador said he believed the defense could make their case during their  closing argument on Monday.

“That will be our opportunity. At the end of the day we have to leave it to the sound judgment of the Senate sitting as an impeachment court whether to acquit or convict the Chief Justice,” he said. “We’ve been consistent that they have not substantially established evidence of culpable violation of the Constitution, high crime or even an impeachable offense.” With Tetch Torres, INQUIRER.net