Anna, Carmen, Isabelle, Francheska and Eric Basa faced the media after Day 41 of the proceedings and said they were the ones who lived simple lives and not the Coronas. 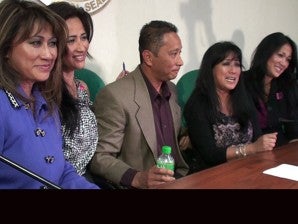 FAMILY FEUD. The children of Jose Maria Basa III (from left) Isabelle, Carmen, Eric, Anna, and Francheska, face the media Wednesday, May 23, at the Senate, acting as an impeachment court, after Day 41 of the proceedings to defend their father who, they claimed, was maligned by Chief Justice Renato Corona in his testimony Tuesday. RYAN LEAGOGO/INQUIRER.net

“Nakakapagtaka sinabi niyang walang trabaho ang tatay ko (We were aghast why he said our father was jobless). He was a farmer, it’s a job. He provided very well for us—disciplined us to not be hateful people,” Anna said.

Carmen said they were back in the country to continue their father’s fight to disprove the Coronas’ claims.

Anna claimed that the Libis property was not a mansion as it was purported to be but a farm where their father raised hogs, chickens and grew vegetables. “Our father was never unemployed, he was agricultural entrepreneur and an agricultural consultant to the Philippine military.”

The farm was, in fact, handed down to their father by their “Lola Charing” for his graduation and was “never in Asuncion Rocco’s (Cristina Corona’s mother) name.”

The property was also paid back for P25,000 by their father, Carmen added.

Eric lambasted the chief magistrate’s view that being a farmer was not a job and asked the public to look at their case in terms of how much support they have received from the Basa clan in the country.

Carmen added that they flew back into the country to continue their father’s fight to disprove Corona’s claims.

The Corona couple’s actions over family corporation Basa-Guidote Enterprises Inc. have been “illegal” and it was “simply stolen from the legitimate owners,” she said. 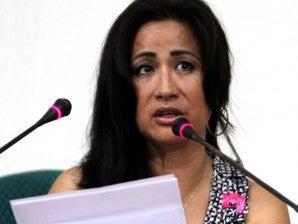 Carmen Basa reads the family's statement during a press conference at the Senate.INQUIRER PHOTO/RAFFY LERMA

“We are ready and willing to argue this in the appropriate court and to continue our late father’s fight for justice,” said Carmen, explaining that whatever specific case they pursue would be discussed with their lawyers.

She described the libel cases lodged against their father and other owners of BGEI as “unfair, unjust and pursued due to the chief justice and Cristina’s influence.”

To Carmen, it was the House prosecution team which was able “uncover more things than we ever have. We have been demanding our right to look at corporate books.”

She said that they might not be in the Philippines until the time the Senate comes up with a decision to whether convict or acquit the chief justice.

Still, they would continue their prayers for Corona and his wife Cristina.

“This was really between Cristina’s mother and my father. They’re both gone. It’s time to let go,” Anna said.