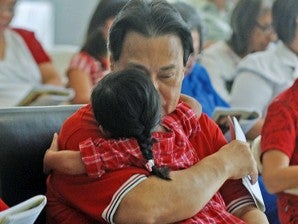 FAMILY DAY. Chief Justice Renato Corona hugs a granddaughter during the last day of a novena at the Supreme Court in Manila. He is expected to testify at the impeachment court tomorrow. RICHARD A. REYES

Chief Justice Renato Corona skipped a key meeting with his lawyers Sunday, telling them to make it a “family day,” a sign, they said, that he “wants to prepare on his own” for his much-anticipated appearance in his impeachment trial tomorrow.

Corona has been sifting through documents and “recalling facts” for his defense on the main charge of nondisclosure of assets, including an alleged $12 million in bank accounts, said Rico Paolo Quicho, a spokesperson for the defense.

When the Chief Justice takes the witness stand, expect him to be “candid, forthright and truthful,” Quicho said.

Corona will also invoke his right against self-incrimination, if necessary, the lawyer said, adding that the Chief Justice also was preparing himself “physically, mentally and spiritually.”

“He’ll be guided by God. He’s ready to face his fate,” Quicho said by phone.

“We’re hoping for the best and expecting the worst,” said another defense lawyer, Tranquil Salvador III.

On Monday, the senator-judges are set to meet in a closed-door caucus to tackle administrative matters, according to Senate Majority Leader Vicente Sotto III.

Sotto said these include, among others, Sen. Miriam Defensor-Santiago’s motion to subpoena bank officials for the verification of Corona’s alleged dollar accounts; Sen. Francis Pangilinan’s proposal to hold a hearing on Friday, usually an off-trial day; and scenarios on the closing arguments of the prosecution and defense panels.

“We hope his testimony will be finished in two days,” Sotto said, but he acknowledged that the length of testimony would depend on the questions.

After Ombudsman Conchita Carpio Morales last week dropped the bombshell that Corona allegedly kept $12 million in 82 accounts in at least five banks, his lawyers have been prepping him up on “possible questions” to be raised on this score.

“He’s studying the facts, recalling the facts. He will just say what he thinks is right, and what he knows about the whole thing. It will be an honest-to-goodness testimony. Nothing more, nothing less,” Quicho said.

“He’ll be candid, forthright, truthful. No secrets. That’s what we’re preparing for.”

Quicho said the lawyers expected that Corona would be subjected to ridicule and humiliation despite statements by Senate President Juan Ponce Enrile, the presiding judge, that he would be accorded due courtesy.

“We can object to the questions of the prosecutors. We won’t back down. But it’s a different story when judges start asking questions,’’ he said. “He’ll be ready for it. This will be the greatest performance of his life. This will define his character.”

Of course, the Chief Justice would invoke his right against self-incrimination “if compelled by circumstances,” like being asked questions unrelated to the verified impeachment complaint, Quicho said. And he’s aware of the implications if he invoked this too often, he added.

“Only the Chief Justice can invoke that. When we feel it would not be good for us, we’d adjust,” he said.

But definitely, Corona is not facing senator-judges and the prosecutors on Tuesday just to clam up, according to Quicho.

“Definitely not. Let’s wait for him. Let’s give him a chance. He requires a modicum of respect, too,” he said.

As for comments that Corona would likely admit to owning a few bank accounts but claim that these came from legitimate sources, Quicho said the public should await his testimony, and not preempt him.

Reminded of observations that the main issue was not the number of accounts Corona kept, but whether the Chief Justice declared these in his statement of assets, liabilities and net worth, Quicho said: “Then impeach him. If they have enough knowledge of the facts, why don’t they testify?”

He said the call of some senators that Corona issue a waiver on his dollar accounts was premature.

“They should not second-guess the Chief Justice. They have to wait before they give their comments. He should be given a clean slate. He’s offering himself as a witness. We should wait for him,” he said.

Corona is well aware that once he starts talking, everything he says will be a fodder for the filing of a future criminal case against him, the lawyer said.

“When he testifies, it’s open season. He can be attacked; he can also attack,” Quicho said. “Everything is on the line. But he’s optimistic. He feels composed, collected. He’s going for the jugular.”

President Aquino’s spokesperson, Edwin Lacierda, said the Palace’s expectation on Corona’s testimony was no different from that of the people.

Sen. Gregorio Honasan said Sunday that regardless of the verdict, Corona still had to deal with the issue of whether he was still fit to preside over the Supreme Court amid the effort by the entire government machinery of the Aquino administration to demonize him.

“If he’s found innocent but the Filipino people feel that he’s culpable, he will find it difficult to preside with moral ascendancy over the highest court of the land,” Honasan said by phone.

On the other hand, “if he’s pronounced guilty, but in the eyes of the Filipino people, the primary audience, he’s innocent, he can walk among his people with his head held high,” he said.

“Ultimately, it will be the people who will decide the Chief Justice’s case,” Honasan said. “Ultimately, at the end of the line, it’s inconsequential whether he’s pronounced guilty or innocent. Ultimately what has to be answered is, what is good for the country?”

Honasan, who has been poring over documents of the past months to prepare for Corona’s testimony, said he would ask clarificatory questions that would not be raised by his colleagues.

“His testimony should be able to bridge the gap and what was presented in court,” he said. With reports from Christine O. Avendaño and Marlon Ramos

Radio Listen live on Radyo Inquirer 990AM or dziq.am

Mobile Get highlights of Corona’s testimony on your mobile via SMS alert. Text ON INQ BREAKING to 4467

E-book Review trial documents and transcripts on our multivolume e-book on the Inquirer Digital Newsstand (http://bit.ly/Inquirer-digital) Free to subscribers