Blind Chinese activist leaves for US 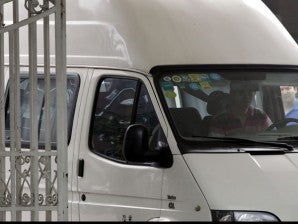 A van with covered windows leaves in a convoy under a tight security from the hospital where blind activist lawyer Chen Guangcheng was known to be recuperating in Beijing, Saturday. AP

BEIJING—A blind Chinese activist was hurriedly taken from a hospital Saturday and boarded a plane that took off for the United States, closing a nearly monthlong diplomatic tussle that had tested US-China relations.

Chen Guangcheng, his wife and their two children were on United Airlines Flight 88, which took off late Saturday afternoon from the Beijing airport. The flight is scheduled to arrive in Newark, New Jersey, Saturday evening.

Earlier Saturday, Chen spoke to The Associated Press by phone from the airport, saying that he had left the hospital where he’d been staying and that he expected to leave late Saturday afternoon for Newark, outside New York City.

“Thousands of thoughts are surging to my mind,” Chen said, sounding hurried but calm. To his supporters and others in the activist community, Chen expressed gratitude and indicated that he hoped to return.

“I am requesting a leave of absence, and I hope that they will understand,” he said.

Chen and his family were driven up to the plane in a vehicle resembling a minibus, and Chen could be seen being pushed in a wheelchair on the tarmac and then onto an elevator that took them up to a sky bridge that was connected to the plane.

Chen and his family’s departure to the United States marks the conclusion of nearly a month of uncertainty and years of mistreatment by local authorities for the self-taught legal activist who made a daring escape from abusive house arrest in his village last month.

His supporters welcomed his departure. “I think this is great progress. We are happy about it,” said US-based rights activist Bob Fu. “It’s a victory for freedom fighters.”

Chen sought the protection of US diplomats at the American Embassy in Beijing, triggering a diplomatic standoff days ahead of unrelated high-level talks on global hotspots and economic imbalances led by Secretary of State Hillary Rodham Clinton. After days of negotiations, the sides announced an agreement in which he and his family would be allowed to travel to the United States for him to study.

The departure of Chen, his wife and two children seemed hastily arranged and entirely orchestrated by Chinese and American officials with no apparent input from the activist.

Chen said he was informed at the hospital just before noon Saturday to pack his bags and get ready to leave. Officials did not give him and his family passports or inform them of their flight details until after they got to the airport.

Seeming ambivalent, Chen said that he was “not happy” about leaving and that he had a lot on his mind, including worries about retaliation against his extended family back home.

“I hope that the government will fulfill the promises it made to me, all of its promises,” Chen said. Such promises included launching an investigation into abuses against him and his family in Shandong province, he said before the phone call was cut off.
Chen and other activists fear authorities in Shandong province will punish Chen’s extended family for his audacious escape. Chen’s nephew, Chen Kegui, is accused of attempted murder after he allegedly used a kitchen knife to attack officials who stormed his house after discovering Chen Guangcheng was missing.

Chen Guangcheng had been awaiting permission to travel to the US to take up an invitation to study law at New York University after he left the embassy on May 2 and was hospitalized for treatment for injuries sustained during his escape.

The State Department has said that US visas for Chen, his wife and children are ready for them to travel to America. The Chinese Foreign Ministry said Saturday that it had no comment on Chen’s planned departure.

The 40-year-old Chen is emblematic of a new breed of activists that the Communist Party finds threatening. Often from rural and working-class families, these “rights defenders,” as they are called, are unlike the students and intellectuals from the elite academies and major cities who led the Tiananmen Square democracy movement.

A self-taught legal activist, Chen gained recognition for crusading for the disabled and fighting against forced abortions in his rural community. But he angered local officials and was convicted in 2006 on what his supporters say were fabricated charges. After serving four years in prison, he then faced an abusive and illegal house arrest.

Nanjing activist blogger He Peirong, who was instrumental in helping Chen escape from house arrest, said she was “very happy” to hear that Chen and his family were on their way to the United States.

“I hope that this will be a good beginning,” said He, who was detained for several days by police for helping Chen. “I hope that they will all be well and safe.”