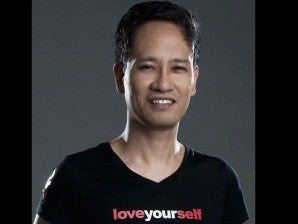 “PEOPLE ask me to do it,” says professor-poet-writer Danto Remoto on running for Senator in 2013. Photo from Danton Remoto’s Facebook account

MANILA, Philippines—Ladlad, said to be the world’s only LGBT (lesbian, gay, bisexual and transgender) political party, on Friday formalized its new attempt to gain a seat in the House of Representatives in next year’s party-list elections.

Ladlad chair emeritus and college professor Danton Remoto also announced he would run for the Senate next year.

“I don’t want to run but people are asking me to do so,” Remoto said, adding that negotiations with at two or three political parties for a slot in their senatorial slate were still ongoing.

“We will finalize it in the next few weeks,” he added.

Remoto, however, said he would “definitely” not run under the ruling Liberal Party (LP).

Remoto, who ran unsuccessfully for the Senate in 2010, blamed the LP for his loss, adding that he, along with former labor undersecretary Susan Ople, were promised to be included in the LP slate but the party changed its mind.

Accompanied by Ladlad members wearing pink shirts and a group of ati-atihan dancers, Remoto and Ladlad chair Bemz Benedito filed the group’s manifestation of intent to participate in the 2013 polls at the Commission on Elections (Comelec) main office in Manila.

However, the receipt of the group’s papers were held in abeyance because of incomplete documents, which the Ladlad leaders promised to complete on Monday.

“This is a historic moment for us, since the Comelec is no longer in the way of our journey to victory in the elections, the way it used to. I had to file a suit against the Comelec in 2010 so the Supreme Court could finally allow us to run. Now, victory looms clear in the horizon,” Remoto said.

The Ladlad leaders said they hope to secure at least two seats in the House by tapping into the LGBT community’s voters which they estimated at around four million. The party-list group needs at least 1.5 million votes to secure at least one seat.

Next year’s party-list race is also the second and last chance for Ladlad to win; otherwise it would be delisted as a party-list group in accordance with election law.

However, Remoto said with a longer preparation time, Ladlad has a bigger change to win this time.

In the 2007 and 2010 elections, the Comelec denied Ladlad’s registration as a party-list group—in the first time, for insufficient membership; and in the second, for being “immoral.”

In January 2010, the Supreme Court issued a temporary restraining order against Comelec and ordered Ladlad’s name included on the ballot. Three months later, the high court voted to reverse Comelec’s prohibition for Ladlad to participate in the party-list race.

“Our campaign is not just for LGBTs. We want a society that has an open mind,”

Benedito, a sociologist, said, adding that Ladlad now has more than 60,000 members, all registered voters, nationwide.

Ladlad’s platforms include support for the passage of the Anti-Discrimination Bill; setting up of livelihood centers for LGBTs who are poor and persons with disabilities; support for LGBT-friendly businesses; setting up of homes for the aged LGBTs as well as centers for information dissemination on legal, psychological and HIV-AIDS issues.

Aside from Benedito, other nominees of the party-list group are lawyers Germaine Leonin and Raymond Alikpala; and Wilfredo Villocino, an officer of the Gender and Development Office of Davao City.

Remoto and Benedito clarified that Ladlad does not advocate same-sex marriage. He said the group is focused on giving equal rights in schools, the workplace, and to people seeking licenses to practice their professions.

Meanwhile, the Ladlad leaders welcomed the apology offered by boxing champ Manny Pacquiao amid criticism over his remarks against same sex marriage in the United States.

Benedito and Remoto, however, said they thought the apology was “not really genuine” and might have been prompted by threats of pullout by Pacquiao’s international sponsors.