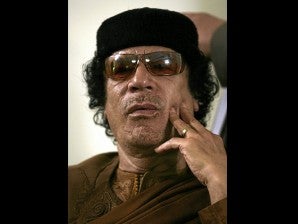 UNITED NATIONS  — The International Criminal Court’s prosecutor said Wednesday that judges will decide whether to let Moammar Gadhafi’s son be prosecuted for war crimes on Libyan soil instead of at the tribunal based in The Hague, Netherlands and one issue is whether a Libyan court would conduct an independent and impartial trial.

The 1998 Rome statute that established the court gives states the primary obligation to prosecute genocide, war crimes, and crimes against humanity. It says the court, known as the ICC, will only step in if a state’s judicial system is unable or ineffective.

The ICC charged Seif last year with crimes against humanity for his alleged role in the brutal crackdown on civilians demonstrating against his father’s regime. He was arrested in November in Libya’s remote southern desert and is being held by a militia in Zintan which refuses to surrender him to the Transitional National Government.

Moreno-Ocampo said he will present observations to the judges on June 4, and will consider whether Seif would be tried for the same crimes and incidents that he has been charged with by the court. He said a court-appointed attorney for Seif will likely present observations.

The Security Council, which referred Libya to the ICC last year, has also been asked for observations but Moreno-Ocampo told reporters that council members have indicated they are not likely to make any.

Libya’s Dabbashi told the Security Council that “the national judicial regime in Libya has been reformed and is now prepared to conduct transparent and just trials which provide all safeguards provided for in international laws.” He added that there is “unanimous agreement” that high officials should be prosecuted in Libya and that “Libyan authorities are adamant on carrying out the trials in Libya.”

But Human Rights Watch said new Libyan laws that criminalize glorifying Gadhafi and grant a blanket amnesty to those who committed crimes if their actions were aimed at “promoting or protecting the revolution” against Gadhafi raise serious questions about the judiciary’s impartiality.

The rights group stressed that it has documented grave violations committed by anti-Gadhafi militias during the uprising as well as ongoing killings, torture and forced displacement.

Richard Dicker, international justice director at Human Rights Watch, said there is a contradiction between the new laws “and impartial and independent prosecution.”

The new law “makes it a crime to say anything positive about the Gadhafi regime,” he said.

Dicker asked what would happen if a defense witness at the trial of Seif came to court and made a positive statement about Gadhafi’s son or what he was trying to do.

“I think this admissibility challenge is going to be of monumental decision with impact quite possibly beyond Libya, and the judges are going to have to take that into account,” Dicker said.