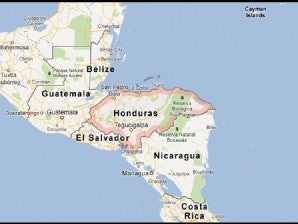 TEGUCIGALPA, Honduras (AP) — The U.S. Drug Enforcement Administration confirmed Wednesday that some of its agents were aboard a U.S.-owned helicopter with Honduran police who opened fire on a small boat on a Honduran river, and a local official said two men and two pregnant women were killed.

Angry inhabitants of the largely Indian Mosquito coast region burned down several government offices in the area in response to the attack and issued a statement saying they wanted DEA agents out of the area.

The shooting took place Friday on the Patuca River in northeastern Honduras. Honduran and U.S. officials said the helicopter team was part of an anti-drug mission and the Honduran officers on board fired only after their aircraft was shot at first.

Local officials said the victims were diving for lobster and shellfish when their boat came under fire.

“These innocent residents were not involved in the drug problem, were in their boat going about their daily fishing activities … when they gunned them down from the air,” Lucio Vaquedano, the mayor of the coastal town of Ahuas, said in a telephone interview Wednesday.

Recounting the burning of government offices in the northern Gracias a Dios region, Vaquedano said, “Some of the inhabitants reacted with anger at the attack, and sought revenge against the government.”

The leaders of the Masta, Diunat, Rayaka, Batiasta and Bamiasta ethnic groups said in a press statement that “the people in that canoe were fishermen, not drug traffickers.”

“For centuries we have been a peaceful people who live in harmony with nature, but today we declared these Americans to be persona non grata in our territory,” the statement continued.

Ricardo Ramirez, the chief of Honduras’ national police force, said the operation “was carried out with the support of the DEA,” and alleged the occupants of the boat were transporting drugs and fired at the helicopter. Ramirez said an assault rifle was seized at the scene.

DEA officials acknowledged their agents were working with Honduran police aboard the helicopter. “We were there in a support role, working with our counterparts,” DEA spokeswoman Dawn Dearden said in Washington.

U.S. government officials, speaking on condition of anonymity because their statements had not been authorized, said Honduran law enforcement did not initiate the shooting, but rather returned fire after being attacked. The officials said the DEA agents did not fire.

Another U.S. official speaking on the same condition of anonymity said several helicopters owned by the U.S. State Department were involved in the mission and carried members of Honduras’ National Police Tactical Response Team. The official didn’t say how many helicopters were on the mission, but said the aircraft were piloted by Guatemalan military officers and outside contractor pilots.

When asked about the shooting, U.S. Embassy official Matthias Mitman in Tegucigalpa provided a written statement saying that “the U.S. assisted Honduran forces with logistical support in this operation” as part of efforts to fight narcotics trafficking.

The State Department says 79 percent of all cocaine smuggling flights leaving South America first land in Honduras, and the U.S .has been working with the Honduran military to stop the drug dealers.

The DEA has a Foreign-deployed Advisory Support Team based in Honduras, one of five in the region, according to congressional testimony. By the end of 2011, 42 Honduran law enforcement agents had been vetted to work with the DEA, according to State Department reports.

Last year, with help from the U.S., the Honduran government stopped more than 22 metric tons of cocaine in Honduras and adjacent waters, nearly four times more than 2010, the State Department has said. Although U.S. military helicopters and personnel from Soto Camp Air Base in Honduras have been involved in previous seizures, U.S. Embassy officials said Wednesday that neither troops nor equipment from the base were involved in Friday’s incident.

George Withers, a senior fellow at the Washington Office on Latin America, which promotes human rights and democracy in the region, said his organization is concerned that DEA agents are frequently embedded with police and military throughout Central and South America for counter-drug operations. He said it’s disconcerting to have Latin American military forces engaged in police work.

“We have seen over the years that whenever the military interfaces with the populace, incidents of human rights abuses go way up,” he said. “We’re concerned that the U.S. is encouraging the use of the military for police work.”

In a written statement, the Committee of the Families of the Disappeared of Honduras, a human rights organization, said that “the so called Honduran authorities have the ethical and political duty to demand from the U.S. Department of State an explanation and a public apology, and to punish those responsible.”