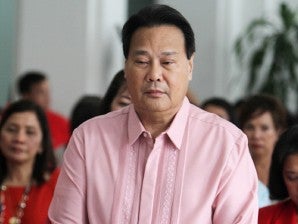 Chief Justice Renato Corona may have accumulated a total of P677 million in unexplained wealth, including “more or less” $10 million, from 2001 to 2012, investigators of the Office of the Ombudsman said in a report.

Corona is scheduled to finally take the witness stand at his trial in the Senate impeachment court on May 22 to answer the allegations against him.

The panel of investigators, formed by Ombudsman Conchita Carpio Morales to look into complaints that Corona may have accumulated ill-gotten wealth, summed up their findings as follows:

“Analyzing the accumulated wealth of subject Corona for the period 2001-2010 by using the acquisition value of the acquired real assets, and the bank transactions in comparison to the supposed income earned and known income from 2001 to 2011, it is apparent that subject Corona has acquired wealth that is not commensurate to his known income,” the panel said.

Travels abroad by the Corona couple and properties registered in the name of their daughters, Ma. Charina and Ma. Carla, were not taken into account.

“The undersigned investigators respectfully submit that the foregoing findings may involve a violation of Republic Act No. 9160 as amended by RA 9194 (the Anti-Money Laundering Act). In addition, the acquisition of wealth of subject Corona appears to be grossly disproportionate to his known income as a public officer,” they said.

Speaker Feliciano Belmonte Jr. furnished reporters a copy of the 20-page memorandum dated May 10, containing the report, forwarded by the panel of investigators to Morales. Belmonte was furnished a copy of the document by the Ombudsman on Friday.

The panel placed the total income of the couple at P30.3 million.

As for Corona’s bank accounts, the panel reported these findings:

“The deposits in BPI and

PSBank are comparatively bigger than what he declared in his SALNs (statements of assets, liabilities and net worth) as cash,” the panel said, pointing out a total discrepancy of P36,770,878.35.

Based on the information obtained by Morales, the panel said it appeared that there were several dollar and peso bank transactions in Corona’s name.

As for his real properties, the panel said Corona declared five properties in his 2010 SALN, including the sale of two parcels of land to pay the loans for condominium units.

The panel initiated the investigation based on the complaints of several persons, including Akbayan party-list Rep. Walden Bello, Risa Hontiveros and Harvey Keh, among others, who were seeking a “lifestyle check” on Corona for possible ill-gotten wealth.

But considering that the documents attached to their complaints were newspaper clippings, the panel sought documents from the Office of the President, Supreme Court, House of Representatives Electoral Tribunal, Senate Electoral Tribunal, Senate, Bureau of Internal Revenue, Land Registration Authority, Bureau of Immigration, Securities and Exchange Commission, Department of Trade and Industry, Social Security System, and the Anti-Money Laundering Council (AMLC), among other agencies.

With respect to Corona’s bank accounts, the panel sought the assistance of the AMLC, which required the panel to submit additional documents showing that Corona had committed an unlawful activity that would warrant the filing of an application for bank inquiry with a local court.

But the panel indicated that it was the Ombudsman who eventually obtained these documents from the AMLC. Morales said she asked AMLC for assistance.