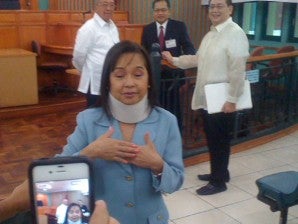 Mr. Aquino acknowledged that the matter is for the courts to decide but added that the administration would take steps to make sure the criminal proceedings against Arroyo wouldn’t be stalled if the courts allow her to seek treatment abroad.

The President said the Arroyo camp previously claimed she needed treatment abroad, something he said has been proven to the contrary.

“Now, they are again saying the same. What’s the difference between their claims before and their claims now?” Mr. Aquino said in an interview after addressing rural development stakeholders in Mindanao.

“Now we are relying on the experts. They will tell us if there really is a problem and if it can’t be treated here in the Philippines,” he added.

“Now, if the court would allow [her leaving], we would take the appropriate steps to make sure our system of justice won’t be bogged down and be postponed indefinitely,” the President said.