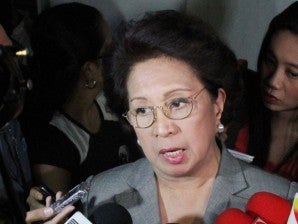 Cuevas said the defense team was presenting the Ombudsman to present that she has “interest” against the Chief Justice and that her investigation on the alleged bank accounts were “illegal” and “baseless.”

In a letter to the Senate read by the Senate Majority Leader Vicente Sotto III, Morales asked that she be allowed to testify ahead of other witnesses also subpoenaed to testify in connection with the $10 million bank deposit that Corona allegedly owned.

Morales cited the “heavy volume of work” that she needs her immediate attention as a reason for her request.

Morales and four others were subpoenaed by the Senate, sitting as an impeachment court in connection with the $10 million bank deposit allegedly owned by the Chief Justice.

The four were Akbayan Representative Walden Bello, Akbayan spokesperson Risa Hontiveros, civil society leader Harvey Keh and Emmanuel Tiu Santos, complainants in a case filed against Corona before the Office of the Ombudsman.

It was Corona’s camp who requested the appearance of the five in the trial, which was immediately granted by the Senate before it suspended the proceeding last Tuesday.

Corona’s defense team promised to present the Chief Justice once the $10 million issue was formally brought to the impeachment court.

Meanwhile, Senators were in full attendance at the resumption of the impeachment trial of Chief Justice Renato Corona on Monday.

Twenty-three senators, acting as judges in the trial, when Senate President and presiding officer Juan Ponce-Enrile called a roll call a little past 2:00 in the afternoon.