Filipino’s grandmama could be Russia’s Anastasia 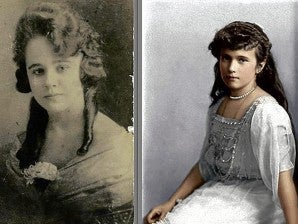 COMPARE THE PORTRAITS The picture at left is that of the writer’s “Grandmama Tasia” when she was a young girl. The one at right is the portrait of the young Grand Duchess Anastasia Romanov of Russia, which she found on the Internet. CONTRIBUTED PHOTOS

I first met Caty Petersen in October 2010 through a mutual friend, who was convinced that I was the right person to write Caty’s story.

She divulged nothing more than that, asking me to just keep an open mind and join them for lunch, which at least promised to be a pleasant one; Kai was one of my favorite restaurants, and we hadn’t seen each other for months.

Caty rushed in, late and breathless and wide-eyed, a large brown envelope in hand, which she handed to me.

Over the next hour, I listened to her relate the highlights of a most unusual tale, riveting in many aspects, and somewhat incredible in others.

The story tumbled out of her, unrestrained. It was a search for roots.

Caty’s grandmother was Russian, but wasn’t someone she really knew that much about, and now she had pieced together a story that was clearly begging to be told. I convinced her to write the story herself.

So this is the story of her grandmother, but it is as much the story of Caty, whose journey of self-discovery really began over a century ago, in the heart of Russia.

“You found them!”  My mom half-sobs and half-shrieks on the phone. 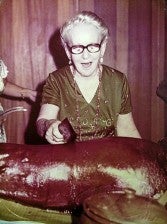 WITH a birthday lechon as she celebrated in her late 70s

It’s May, 2009.  I’m on holiday with my husband and son in St. Petersburg, Russia, with a mission to trace my Russian roots and hopefully reunite with relatives of my Russian grandmama. Getting ready to leave my hotel room for more sightseeing, I’m on the phone with my hysterical mom who’s halfway across the world in Manila. She asked that I call her immediately after receiving pictures I e-mailed her from the previous day’s visit to Catherine’s Palace.

“But you have Mama’s picture when she was young!  How did you get this?” my Mom asks, absolutely confusing me.

I reply, “Mom, I don’t know what you’re talking about.  I didn’t find our relatives here because Grandmama gave us the wrong name. What picture are you talking about?”

My Mom identifies the photo I took of a portrait of Russia’s last queen—Czarina Alexandra Romanov.

Having just discovered an hour earlier that my grandmama’s name, Tasia, is actually a diminutive of the name Anastasia, I start hyperventilating.

Anastasia was also the name of the Czar’s youngest daughter, the Grand Duchess Anastasia Romanov of Russia, who, according to lore, may have possibly escaped the massacre that killed the last royal family of Russia.

My mom cries and insists that this particular photo is indeed her mom when she was that age. I now keep silent. My mom is too emotional for me to continue arguing with. 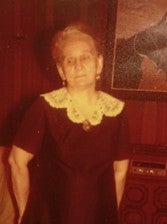 “TASIA” loved to wear lace dresses even in her old age.

I turn my gaze back to the picture she’s looking at. Suddenly, I seem to see my grandmama’s face staring back at me. Then I, too, start crying.

For some reason, I had always found it funny to call my grandmama “Babushka,” the Russian word for grandmother. Instead, I chose to call her grandmama, while the rest of the grandchildren called her Lola Puti (white grandmother in Tagalog).

But I delighted in her term of endearment for me as a child—“Katushka”—especially when she sang it to me in words that were totally foreign, while she rubbed my back during bouts of my almost-weekly asthma attacks.

On the day I was born, my dad named me Frian, an odd name for a big, bald and loud baby girl. But somehow, his choice was not meant to be. My grandmama rushed to the hospital and announced I was to be called Catherine, after Catherine the Great, her motherland’s greatest Empress of all time.  This was a surprise to all, because she had until then refused to give any of her children and earlier grandchildren Russian names. Until I came along.

Growing up, I was a very talkative, inquisitive and curious child (I still am). Because my grandmama lived with us for many years, I became very familiar with and entranced by her uniqueness.

She said her name was Tasia. And her last name was always a cause for family debates, because it irritated her no end that no one in our family could pronounce it properly. To our Filipino ears, it sounded like Kazzuhina, so that is how we said it and spelled it, much to her chagrin. It didn’t help that she would write it down in Cyrillic, the alphabet she grew up with, which added more to the confusion.

ONA RARE outing, a vacation in Baguio, in front of Hyatt Terraces

She told us this much: that she was 18 when she arrived in the Philippines after spending months on a ship from Russia, escaping the Bolshevik Revolution when it escalated in 1918. Handed over to the ship captain by family members for safekeeping, she was locked in her cabin for her safety, isolated from all other Russian passengers fleeing the revolution.

She did not join the rest of the White Russian émigrés (anti-communist, monarchist Russians who emigrated from Russia in the wake of the Bolshevik Revolution) who got off in China and Japan.

The only passenger left, she alone disembarked in a Philippine port, assisted by the protective ship captain, without any identification papers or documents.

Brought to a monastery or orphanage somewhere in Manila, she was looked after by nuns for some time until she was turned over to a wealthy spinster who played matchmaker to her and my future grandfather, Lope Pelayo.

Refusing to marry my infatuated grandfather on the grounds that she “just can’t,” she nevertheless lived with him for over four decades and bore him nine children.  My mother is their sixth child.

On his deathbed in 1964, my grandfather was finally wed to my grandmama when the Mayor of Manila and family friend, Antonio Villegas, intervened and informed her that none of her children would inherit anything if she did not marry him.

As a precocious child growing up and at times sharing a bedroom with my mysterious grandmama, I reveled in her regal, unchanging daily rituals.

Watching her from my bed, I often lost count of how many strokes the maid brushed my grandmama’s hip-long silver hair nightly, while she sat in her mandated matching slippers and nightgowns. After which, my grandmama would move to sit on the edge of her bed while another maid knelt on the floor with a basin of warm soapy water to wash my grandmama’s feet, then dry and powder them before she would retire for the night. This happened every night without fail, even though she had just bathed less than an hour before. 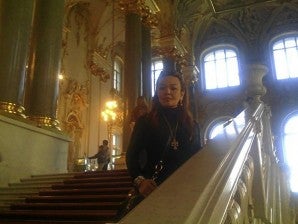 THE AUTHOR on her milestone visit to Russia

To call her vain would be an understatement. She refused to leave her bedroom without having powdered her face, put on lipstick and perfume, and with a well-coiffed hairdo—even if she was just coming out for breakfast.

More often than not, the family would impatiently wait for her to sit at the head of the table, which had to be set with cloth napkins. She did not allow the use of paper napkins. The same rule applied to tissue paper; only cloth handkerchiefs were to be used at all times. Looking back, I can’t help but smile, knowing that today’s advocates for saving trees would commend her for those little eccentricities.

More enthralling were her stories of growing up in Russia.

She said she was the youngest of four daughters, and the fifth and youngest child of the family was the only boy, Alexei. Her best friend was her older sister, Maria.  These were the only names she mentioned.

She talked about how utterly beautiful Russia was to her, how she rode around in a golden carriage drawn by eight white horses, or by boat whenever she and her family traveled.

She kept us in awe when she spoke of massive walls covered with jewels, or how they enjoyed the freshest butter, breads and cheeses because they were made right in their own house.

Her love of animals, caring for kittens and lovebirds when I was a child, must have stretched back to her own childhood.  She demonstrated to us how she and her sisters would cut the bottom of their gowns around a sleeping cat or dog when their beloved pets snoozed on top of their long dresses as they sat sewing or doing embroidery. When we protested that it all seemed a bit extravagant, she merely smiled and said that it was how they did things back then.

Because she rarely smiled, it was a pleasure to watch her waltz around the room with a blissful smile on her glowing face whenever we played classical music. So when the time came for me to be introduced to society at the age of 18, I promptly chose Johann Strauss’ “The Blue Danube” as the accompaniment to which my escort and I, with 12 pairs of my accommodating friends, danced and twirled, having spent eight Sundays of rehearsals.

Watching the video of that magical debutante night, I catch glimpses of my grandmama smiling and moving her well-coiffed silver head to the music as she watched her Katushka waltz her waltz.

It was certainly a rare event to get my grandmama out of the house. A recluse, she refused to venture out even to the supermarket or the church. There was always this fear of being seen by her fellow “white-skinned people” that made her shrink away from the outside world.

My incessant pleas during my teenaged years to write to the Russian Embassy to ask for their assistance in locating our Russian relatives so I could have them as my pen pals were rebuffed by her immediately.

Her stern response was always a warning: “If they discover I am here, we will all be killed.”

The family was used to hearing her intone that warning, without fully understanding what it meant, because she never explained why, or who “they” were.  We all acquiesced and lived our lives as privately as possible out of respect for her, resigned to the idea that she was an orphan and that no relatives existed.

Tomorrow: Living with my grandmother’s past and beyond