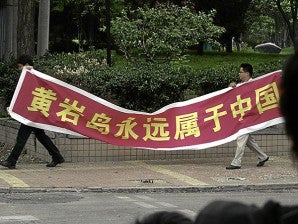 THEM, TOO Two Chinese men carry a banner saying “Huangyan (Panatag Shoal to Filipinos) will always belong to China” as they walk toward the Philippine embassy in Beijing on Friday. The monthlong standoff between China and the Philippines over Scarborough Shoal is snowballing with hints of economic retaliation and sharpening public opinion, which narrows the space for the diplomatic resolution that both sides endlessly claim they are seeking. AP

DAVAO CITY—Chinese authorities on Friday continued to refuse entry to some 1,500 containers containing Cavendish banana because of an alleged finding that fruits earlier sent by Mindanao banana growers there showed signs of disease found only in coconuts.

Stephen Antig, president of the Pilipino Banana Growers and Exporters Association—which groups 18 companies in Mindanao—said that as of 3 p.m. Thursday, the bananas were being left to rot at the ports of Dalian, Shanghai, and Xingang as Chinese authorities insisted on the country’s new phytosanitary rules for bananas arriving from the Philippines.

“Mindanao exporters feel we are being harassed,” Antig said, adding that it could be related to the standoff between the Philippines and China at Scarborough Shoal in the West Philippine Sea.

He said, however, that the exporters’ group did not want “to think of it as political because we are businessmen.”

In Manila, presidential spokesperson Edwin Lacierda reiterated an earlier statement playing down a link between the Scarborough dispute and the new inspection rules in China for Philippine fruit exports.

Lacierda said the tighter inspections were a “technical issue” and the regulatory agencies of the Philippines and China were dealing with it.

Antig said Chinese authorities claimed the inspection of the cargoes was going on after they found Aspidiotus destructor in some containers inspected in March.

That, among other issues, had triggered the stricter inspection, Antig said, although everyone knew the Aspidiotus is found only in coconuts. Antig said they feared that the bananas could rot.

Antig said the ports had limited power facilities and the air-conditioned containers were left unplugged.

“The bananas are being held in the ports for inspection when in just a matter of three days, the bananas can turn into vinegar,” he said.

“I hope this is really not political because we are in the business. We don’t want to believe that the life of the banana industry is threatened by our country’s problem with China,” Antig said.

Agriculture Secretary Proceso Alcala told the exporters that a task force had been formed to deal with the problem. If needed, members of the task force would accompany the shipments to monitor quarantine procedures in the destination.

The banana exporters had scheduled a meeting in Panabo City for Friday but canceled it, as China might misconstrue it as part of the protests in Manila against Chinese intrusion on Scarborough Shoal.

A source from Philexport Mindanao, who asked not to be named, said the meeting was aimed at calling the government’s attention to and asking for help on the stricter quarantine procedures in China. Reports from Germelina Lacorte and Ayan Mellejor, Inquirer Mindanao, and Norman Bordadora

Read Next
Cops stop burning of Chinese flag at global protest rally in Makati
EDITORS' PICK
EDITORIAL: OFWs save the day
Incoming 40 million doses of Pfizer COVID-19 vaccine key to herd immunity – Galvez
Smart celebrates all kinds of ‘#SimplyLove’ for Pride Month
Smart brings KCON:TACT especially 4U to subscribers from June 19 to 27
Gilas out to prove Korea win not a fluke; Tab fires back at ‘lucky shot’ remark
Booker sizzles as Suns beat Clippers in Game 1 of Western Conference finals
MOST READ
Probe troll farms, lawmakers urge
No plot to oust Pacquiao as PDP-Laban president in July meeting — Nograles
Handcuffed for 123 days, Ukraine couple splits
PAL to ax some long-haul flights to slow bleeding
Don't miss out on the latest news and information.