Manila Zoo rejects UK rocker’s plea to retire Mali, the elephant, in US 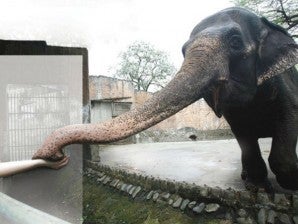 SHE’S STAYING Mali the elephant is not leaving the Manila Zoo. FILE PHOTO

Mali is happy in her Philippine home. Why remove her from the Manila Zoo—where she has lived for more than three decades—and take her to a strange new sanctuary in the United States?

That was the reply of Manila City government officials to an appeal from British rock icon Morrissey, who had written President Benigno Aquino III asking that Mali—now 36 years old and weighing 7 tons (14,000 pounds)—be freed from captivity, sent into retirement and allowed to live in a US sanctuary for aging elephants.

“She is used to this kind of environment,” Deogracias Manimbo, head of Manila’s Public Recreation and Parks Bureau, which oversees the Manila Zoo, told the Inquirer. “She might not withstand a different environment from what she has gotten used to.”

“She (also) might not survive in the wild,” Manimbo said, adding: “The fact that she has exceeded her life expectancy of 35 years while at the Manila Zoo means that she is happy there.”

Mali has been at the zoo for 32 years, or since she was orphaned at 4 years old, and may no longer adapt well in the wild, Manimbo also said.

Mali, now 10 feet tall, was donated by the Sri Lankan government in 1980 to then first lady Imelda Marcos and came from one of the elephant orphanages in that country, according to Manimbo.

Malacañang said it had received Morrisey’s letter to Aquino and was looking into it.

“According to the Office of the Executive Secretary, it received the letter today (Thursday) and it is being evaluated,” deputy presidential spokesperson Abigail Valte said in a text message.

Deserves to be free

Ahead of his Manila concert scheduled for May 13, Morrissey called on Aquino to send what the rock star described as Manila Zoo’s long-suffering elephant into retirement.

The British ex-singer of the alternative rock group The Smiths said that Mali deserved a reprieve from a lifetime of confinement.

“I ask that you send Mali to a sanctuary, where she would have room to roam and be able to be among other members of her own species,” Morrissey wrote.

Echoing allegations by the animal rights group People for the Ethical Treatment of Animals (Peta), Morrissey said Mali had been unable to roam and socialize unlike her cousins in the wild.

“Her life consists of extreme loneliness, boredom and isolation in an area that is a fraction of the size of her natural habitat,” Morrissey said, suggesting this could drive her to insanity.

Peta, which Morrissey supports, wants Mali shipped to a US sanctuary for old, sick or needy elephants that have been retired from zoos and circuses.

It was not the first time Aquino’s intervention had been sought over conditions at the nearly 53-year-old zoo.

Last year a college student’s blog about allegedly mistreated zoo animals provoked an instant Internet global furor and forced Aquino to call on officials to look into their welfare.

Manila Zoo chief veterinarian Donald Manalastas yesterday insisted that Mali, donated by Sri Lanka after its parents were poached, was well and fit.

“We have expanded the enclosure of Mali and increased her food with more nutrients. We have proof and papers of what we feed her. We do not torture her,” Manalastas told Agence France-Presse.

Manimbo told the Inquirer that the Peta and other animal rights groups had long been clamoring for Mali—whose full name is Vishwamali—to be returned to the wild.

Manimbo said that government agencies, including the Bureau of Animal Industry  and the Department of Environment and Natural Resources, had certified that the female elephant was well cared for at the zoo.

“She was precisely donated to us because she needed a home where she would be well taken care of,” Manimbo said, adding the Manila Zoo had practically become Mali’s “natural habitat.”

Mali’s “natural habitat” is a 2,000-square meter enclosure where she has access to two water pools for bathing and for drinking and where she is fed and tended to by animal experts.

“If Mali had been taken from the wild, it (keeping her in captivity) would be so wrong. But the elephant came from a zoo exchange and she has been in captivity for 36 years. She can no longer be put in the wild,” Manimbo stressed.

A zoo exchange is practical because other zoos have excess animals, mostly captive-bred, which the zoos may not be able to tend to.

“She will be helpless in the wild and that would be more cruel,” Manimbo stressed. With reports from AFP, Norman Bordadora and trainees Julliane de Jesus and Ann Clariz Yap